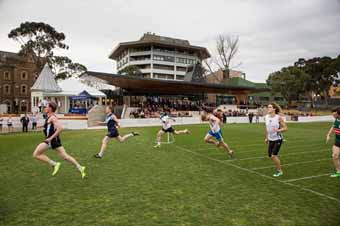 The Ernie Cropley Pavilion – which has already won a Master Builders of Australia Association Commercial Building Award for the quality of its construction – is a state-of-the-art facility, which incorporates elements of the original structure built in 1906.

Designed by Cox Architects, it provides enhanced spectator areas, a bar and kiosk, social spaces for events, a treatment suite and changing rooms for players in a newly installed basement area.

The $6.7 million project has benefitted from $1.3 million of philanthropic support pledged or received to date, with two significant bequests, and also the support of individuals including a donor who has been matching gifts on a dollar for dollar basis.

Known affectionately as ‘The Pavvy’, the iconic building was last upgraded more than 50 years ago, following a fire when all but the remaining turret was burnt down.  The turret has been restored and included in the new building’s design.

Melbourne University Sport Director Tim Lee said the University’s sporting clubs have been in need of a new facility for some time.

Lee explained “the Pavvy has been the centre of sporting activity at the University for almost 160 years as the home of football, cricket and baseball training, and a significant landmark on campus.

“The refurbishment was well overdue but it is now a magnificent facility providing first class amenities for our football and cricket teams, which I am sure will ensure their future success.

“Many of our teams and clubs are made of athletes who compete at very senior levels, just below national and state leagues.

“We’re extremely pleased the new facilities now meet the high expectations of our own and visiting elite athletes, tenant clubs and casual users.”

“I am also delighted the pavilion will now bear the name of Ernie Cropley in recognition of his exceptional service as head curator for more than 50 years, but equally for the dedication and support he bestowed on the many young students involved in the cricket, football and baseball clubs during his time at the University.”

Lee also acknowledged the financial contribution of AFL Victoria, the Estate of Nona Lee, the Blackwood Trust and several former University footballers and cricketers who have generously given back to sport at the University.

The launch follows the success of the University Blues, whose senior team and seconds won their respective Grand Finals in the Victorian Amateur Football Association (VAFA) on Saturday. The University Blacks have their chance on Saturday when the seniors, reserves and ‘Phoenix’ (thirds) all play Grand Finals.

Philanthropy to support the sports pavilion redevelopment is part of Believe – the Campaign for the University of Melbourne.