More than 70 doctors and health experts in the United Kingdom have called for a ban on tackling in school rugby games.

In an open letter that warns of the high risk of serious injury among under-18s playing rugby, they urge schools to move to touch and non-contact versions of the game.

A UK Government drive to boost participation in rugby in English schools by linking them with rugby clubs is also criticised by the health experts, who point out that the UN Convention on the Rights of the Child obliges governments to inform children about injury risks.

The letter – which is addressed to UK Government Ministers, Chief Medical Officers and Children’s Commissioners – describes rugby as a “high-impact collision sport”.

It reads “the majority of all injuries occur during contact or collision, such as the tackle and the scrum”, adding “these injuries, which include fractures, ligamentous tears, dislocated shoulders, spinal injuries and head injuries ,can have short-term, life-long and life-ending consequences for children.”

The letter is the first stage of a campaign that will include a petition on the change.org website which, if it receives 100,000 signatures, will trigger the consideration of a debate by MPs on the issue.

Rugby is a compulsory part of the physical education curriculum from the age of 11 in many boys’ schools, particularly in the independent sector.

The letter, signed by sport scholars, academics, doctors and public health professionals, says repeat concussions have been found to have a link to cognitive impairment, and an association with problems such as depression, memory loss and diminished verbal abilities. Children also took longer to recover to normal levels on measures of memory, reaction speed and post-concussive symptoms.

The  signatories included Professor Allyson Pollock, a Professor of public health research and policy at Queen Mary University of London, who has campaigned about the dangers of rugby.

Stating that children are being exposed to serious and catastrophic risk of injury, Professor Pollock states “parents expect the state to look after their children when they are at school. Rugby is a high-impact collision sport and given that children are more susceptible to injuries such as concussion, the absence of injury surveillance systems and primary prevention strategies is worrying.” 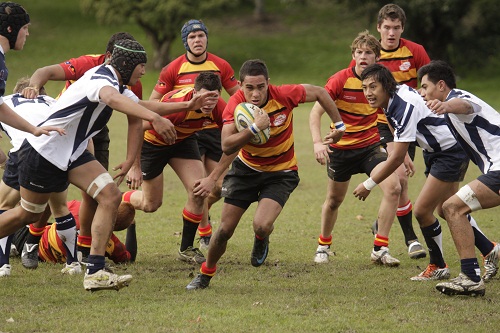 Eric Anderson, a Professor of Sport, Masculinities and Sexualities at the University of Winchester, said the signatories did not have a contention with rugby, but with the collisions that occur in the sport, stated “school children should not be forced to collide with other children as part of the national curriculum for physical education.

“A more sensible approach is to play tag rugby.”

A UK Department for Education spokeswoman said schools were expected to be aware of the risks associated with sporting activities and to provide a safe environment for pupils.

The spokeswoman stated “team sports, such as rugby, play an important role in developing character.

“They can help children and young people develop positive traits, such as fair play, leadership and resilience, and teach them how to bounce back from defeat, how to respect others and how to work together in teams to achieve a goal.

“We have given schools the flexibility to organise and deliver a diverse and challenging PE curriculum which best suits the needs of their students.”

The Rugby Football Union said it took player safety “extremely seriously” and that recent changes meant young players underwent a “gradual and managed” introduction to the contact version of the game.

An RFU spokesman said the Union had also carried out a three-year injury prevention and surveillance study on schoolboy injuries, as well as implementing a guidance program known as RugbySafe.

He explained “we believe that high quality coaching, officiating, medical support and appropriate player behaviour in line with the core values all contribute to reducing the risk of injury occurring.”