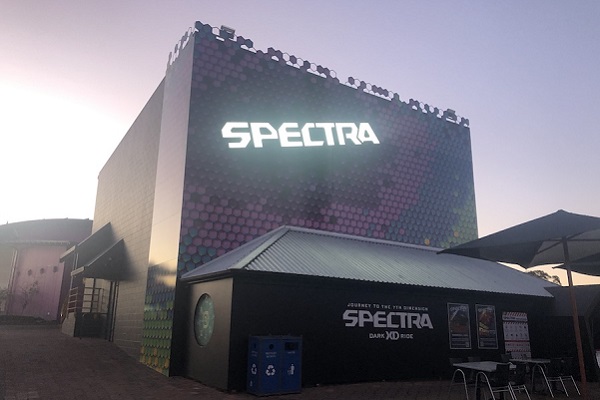 Auckland amusement park Rainbow’s End has revealed the completion of a new XD Dark Ride, custom made for the business and installed by Canadian media-based attractions creators Triotech.

This new attraction replaces the park’s 3D Motion Master ride and features different 3D movies packed with extra special effects, as well as light blasters so that visitors can be part of the action.

Initially due to open for the April school holidays, but lockdown caused installation work to pause as the Triotech team returned to Canada.

Once New Zealand moved out of lockdown, Triotech worked remotely with the construction and maintenance teams at Rainbow’s End to finish the project and prepare it for opening.

Commenting on the addition, Rainbow’s End Chief Executive, Karen Crabb stated “we are really excited to be opening the Spectra XD Dark Ride.

“It has been a massive team effort to complete the installation and theming. Kiwis are incredibly creative and resourceful and this is a great example of how we can pull together to create an entertainment offering that rivals our international counterparts.”

“The one thing about the XD Dark Ride is that guests always come out with a smile! It appeals to everyone, it’s immersive, it’s interactive, they play, they compete, they are part of the action.”

Triotech is an award-winning creator of media-based attractions. It has also recently helped to deliver two exclusive custom XD films for the Singapore Discovery Centre.