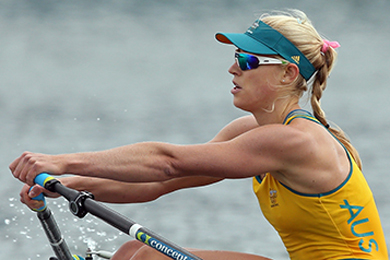 Stockwell said the trio join the Australian Sports Foundation Board at an exciting time for the development and growth of philanthropic giving to sport in Australia, stating "as the only body that can give donors a tax deduction for donations to sport, the Sports Foundation has taken great strides over the past four years to raise almost $150 million.

“Moving forward, we have several great initiatives including the establishment of the Sports Foundation’s Charity and the creation of the Prime Minister’s Sporting Oration which will change the landscape of fundraising for grassroots and community sport in Australia.

“In addition to their sporting achievements, each of our new Board members will bring valuable business and commercial skills and experience to the Sports Foundation, which will help us in our mission to increase philanthropic funding for sport to $100m.”

Brennan (pictured), who recently announced her retirement from rowing, attended the 2008 Beijing, 2012 London and 2016 Rio Olympic Games. Over her three Games, Brennan won gold in the single sculls in Rio, plus silver in the double sculls and bronze in the single sculls at the London Games.  A lawyer, Brennan is Deputy Chair of the Australian Olympic Committee's Athletes Commission.

Miller, National Associate Director for Richardson & Wrench Projects, was a member of the Australian women’s water polo team which defeated the United States 4-3 in the dying seconds of the gold medal match at the Sydney 2000 Olympics.

Baildon, Managing Director at the Baildon Group, was the first Commonwealth swimmer to break 50 seconds for the 100m freestyle and represented Australia at the 1988 Seoul and 1992 Barcelona Olympic Games.

Recently, Baildon was Member of the Sport and Technical Committee and Chairman of the Athletes Advisory Board at the Gold Coast 2018 Commonwealth Games. Last month, he was elected to the Board of Swimming Australia.