Tread the boards at the new Eternity Playhouse 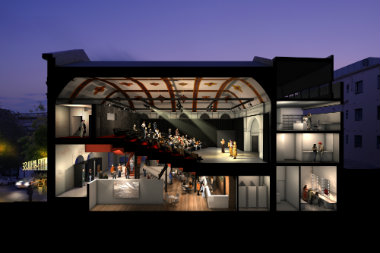 Sydneysiders are invited backstage for an exclusive tour of Sydney's first new major theatre in six years, the Eternity Playhouse, ahead of the official opening night of the first play in November.

Housed in a converted Victorian-era church in Darlinghurst, the Eternity Playhouse will host a public open day from 11am to 1pm on 22nd September. Following its $7.9 million transformation by the City of Sydney, it is the first theatre to be opened since Carriageworks in Eveleigh raised its curtains in 2007.

Sydneysiders will be able to step backstage, explore the dressing rooms and try their luck on the stage at the community open day, which will also feature musical entertainment and light refreshments.

Lord Mayor Clover Moore encouraged Sydneysiders to attend the open day for a chance to go behind the scenes at the stunning new venue, stating "the City of Sydney has transformed the historic Burton Street Tabernacle into a modern 200-seat theatre with bar and café.

"It will be exciting to see Darlinghurst Theatre Company stage its first production in the new theatre in November with a classic Arthur Miller production. This is a rare opportunity for the public to tread the boards at what is sure to be one of Sydney's ultimate theatre destinations."

The theatre's inaugural show by renowned theatre director Iain Sinclair is Arthur Miller's All My Sons, which will open at the theatre on 5 November. The play features a stellar cast including Marshall Napier, Toni Scanlan, Briallen Clarke, Robin Goldsworthy, Anthony Gooley, Andrew Henry and Meredith Penman.

Darlinghurst Theatre Company Director Glenn Terry, who established the company in 1993, said it was a perfect venue to showcase one of the most celebrated plays of the twentieth century.

Terry added "we believe a theatre ought to be a vibrant, inspiring and welcoming place, and our new home, the Eternity Playhouse, will be just that.

"I'd like to thank the Lord Mayor and City of Sydney for their vision in purchasing the run down Burton Street Tabernacle and converting it to a beautiful and eco-friendly theatre that will be of great sentimental and cultural value for theatregoers and local residents.

"The Eternity Playhouse is a welcome and essential part of the cultural fabric of Sydney."

The Eternity Playhouse, on the corner of Burton and Palmer streets, is across the road from community and cultural space, Heffron Hall, which is about to undergo a major transformation by the City. When complete, the area will be a creative hub where artists can hone their talent and the community can kick back and be entertained.

The Eternity Playhouse is named after the late Arthur Stace, a former Burton Street Tabernacle parishioner who wrote the word Eternity' in chalk on Sydney's streets from the 1930s to the 1950s.

Stace was inspired to create the flowing copperplate chalk script after hearing a sermon at the church in 1932 and it was said he wrote the word more than a million times over the next 20 years.

Stace's career as a pavement scribe remained secret until 1956 when his identity was revealed in The Sydney Telegraph.

For more information go to www.darlinghursttheatre.com