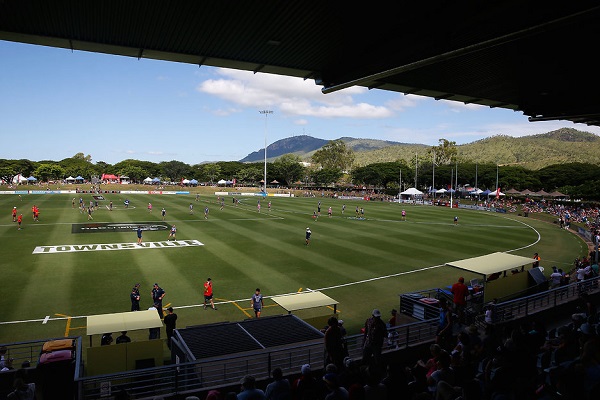 Riverway Stadium in Townsville became the 48th different AFL venue and the fifth in Queensland when it hosted the Gold Coast Suns v St Kilda round clash on Saturday 15th June.

The round 13 fixture saw the Riverway Stadium, formerly Tony Ireland Stadium, joins a venue list that began with four matches in round one of the first AFL/VFL season in 1897.

Since then, AFL fixtures have been held in New Zealand (Wellington’s Westpac Stadium) and China (Shanghai’s Jiangwan Stadium).

The other Queensland venues to host AFL Premiership clashes have been the Gabba in Brisbane, Metricon Stadium on the Gold Coast, Cazaly’s Stadium in Cairns and the Brisbane Exhibition Ground.

The Brisbane Exhibition Ground staged its fixture in round eight in 1952 when all matches were played at regional and interstate venues for promotional reasons. Other grounds used were the SCG, North Hobart Oval plus Albury in regional NSW, and Euroa and Yallourn in regional Victoria.

The Brisbane Exhibition Ground had also hosted Queensland Football League matches prior to the First World War and the 1950 Australian carnival.

Past of Townsville's Riverway sporting and cultural complex, the Riverway Stadium is an international standard AFL and cricket stadium with a 10,000 capacity that includes a 1013-seat grandstand and supporting facilities, a practice oval and cricket practice nets.