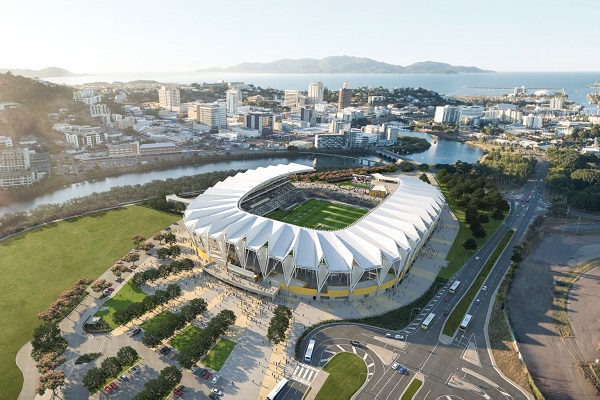 North Queensland Stadium will open its gates to the community for the first time, with a free People’s Day confirmed for Saturday 22nd February, 2020.

With the main stadium build works now more than 85% complete, the project remains on track to host the Sir Elton John concert and the 2020 National Rugby League (NRL) Premiership Season next year.

“People’s Day will act like an ‘open house’, giving the community an opportunity to visit the dressing rooms, press boxes and choose the best seat in the house for when they come back for events."

Federal Minister for Population, Cities and Urban Infrastructure Alan Tudge noted it was important the whole community be given the opportunity to celebrate the milestone.

“This world-class stadium has been built for the people of Townsville, so it’s only fitting that they get an opportunity to peek behind the scenes before it opens.”

Minister for Sport Mick de Brenni added that the day would be a proud one for thousands of local trades people and Townsville businesses noting “this will be the first chance for fans to get a look at North Queensland’s new home of sport and entertainment, and for local workers who’ve helped build it to show off their craftsmanship to friends and family, but also allows for full demonstration of stadium systems.

“From catering to security, this venue will provide around 800 jobs during a major event, so this is a chance for those workers to get a feel for a packed venue and have a practice run before that first Sir Elton John concert.”

Federal Minister for Youth and Sport Richard Colbeck said the new stadium was part of the national Sport 2030 plan to grow the sports industry around the country.

“Australia’s sports industry is a major driver of our economy, contributing more than $12 billion a year, which is why it’s so important for Far North Queensland that we are investing in this infrastructure upgrade.”

Townsville Mayor Jenny Hill said she expected the stadium to become a drawcard for the region.

“This stadium will become the ‘must do’ location for sport, entertainment, community activities and corporate events, and it will be our first chance to see what a game-changer the stadium will be for our region.

“With the event being held on a Saturday, I really hope the whole North Queensland community will take the opportunity to come to Townsville to celebrate the opening, and stay and enjoy the local hospitality.”

For more information on People’s Day or the North Queensland Stadium, visit www.northqueenslandstadium.com.au.