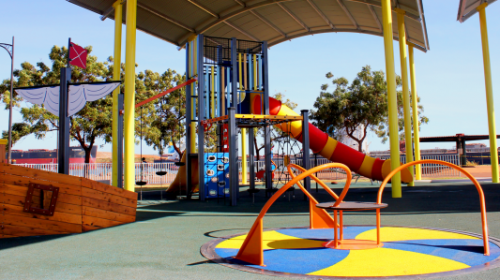 Since reopening in June, the playground in the Town of Port Hedland’s Marapikurrinya Park has once again been attracting local children and their families.

The playground was burnt down in 2015, and after over a year of consultation, planning and construction, works on the $520,000 project were completed in June.

Town of Port Hedland Mayor Camilo Blanco said that he is excited to see the new park in use, stating “it was a huge disappointment when the park was destroyed in 2015.”

Commenting on the new and improved playground, Mayor Blanco added “the new playground is not only a fun and exciting activation of the space, but it is also accessible which will allow all of our children to be able to enjoy it.

“(It is) an improvement on what was there previously - with the park overlooking our port and shipping activity, the playground has a nautical theme with accessible equipment for people of all abilities, which was one of our key priorities.”

Highlights of the new playground, supplied and constructed by Moduplay, include a new permanent shade structure, accessibility ramps, a new accessibility-friendly carousel, a larger playground footprint, a play tower, a sunken timber boat bow for junior pirates, play equipment for children aged between two and 12 years, and perimeter fencing.

Commenting on the project, a case study on Moduplay’s website explains how community engagement “gave residents ‘buy-in’ to the design process, and at the same time simplified the consultation process for the Council, saving money and allowing more budget for the asset itself.” 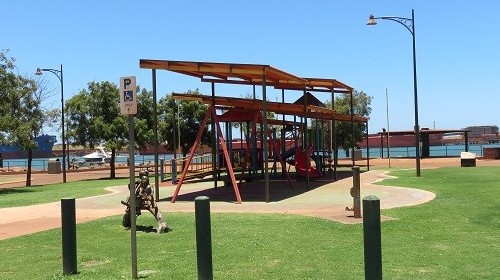 Moduplay’s design concept included a central tower to make the most of the view out over the port, a timber sunken boat bow to carry a light nautical theme, some freestanding dynamic items, a nest swing and an inclusive carousel.

The project was made possible with funding support from Lotterywest, the Federal Government’s Stronger Communities program, donations from the community, and the Town of Port Hedland.

Acknowledging this, Mayor Blanco added “we were overwhelmed by the support we received from residents and businesses who threw their support behind rebuilding the playground.”

Looking to the future, Mayor Blanco concluded that “having engaged kids in the rebuild of the playground has given them an area that they can be proud of and that they will respect.”