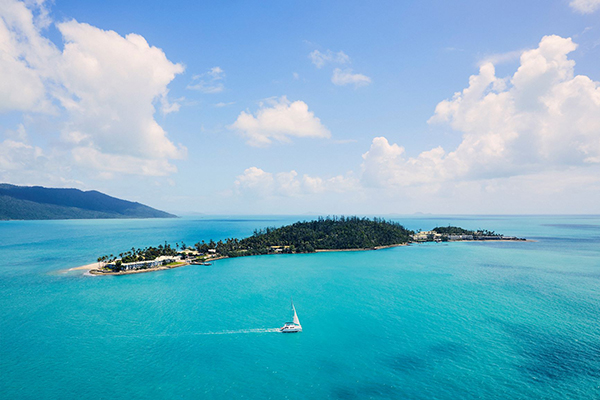 Recent reporting by 60 Minutes and 9news.com.au on the closure and abandonment of more than half of the 30 hotels, resorts and bars throughout the Whitsundays has been criticised by Tourism Whitsundays as being “unbalanced”.

60 Minutes on Sunday night reported on ‘decaying’ islands off the coast of Queensland - highlighting the state of South Molle Island and Lindeman Island while an article published on 9news.com.au alongside the report said the Whitsundays were no longer a beacon of success for the Australian tourism industry given their state of disarray.

Tourism Whitsundays Chief Executive Natassia Wheeler has noted that the story aired by 60 Minutes with regard to the islands was “not a balanced look at island resorts on the Whitsunday Coast.

"While it could have been a sad, disheartening story the fact of the matter is, the Whitsundays have relished in the re-opening of some of the most iconic island resorts following major refurbishments and redevelopment.

“The story showed no regard for the people behind the industry and the thousands that work hard and invest to promote this magical part of the world."

Wheeler added that the 60 Minutes’ coverage was “crushing” given Tourism Whitsundays joint marketing activity to promote the return of the region, stating “with the promise of promoting the region, reminding people that the island resorts are up and running, the mainland and islands are full of amazing experiences for holiday makers to come and enjoy.”

Whitsunday Regional Council Mayor Andrew Wilcox also highlighted that the reporting missed an important point - the efforts to revitalise the region in the wake of Cyclone Debbie.

Reporter Charles Wooley looked at islands from the Whitsundays to the Cairns coast, some of which Cyclone Yasi destroyed in 2011 and Cyclone Debbie lashed in 2017.

Mayor Willcox added that the report had left out “glaring facts” about the region, including the reopening of Daydream Island and Hayman Island.

In April, Daydream Island officially re-opened following a $120 million-plus redevelopment. While in July, Hayman Island by InterContinental re-opened after a $135 million redevelopment.

Further investments in the region include a multi-million-dollar proposal by the owners of new resort Elysian Retreat on Long Island; a $500 million investment over 10 years by Hamilton Island Enterprises; and a proposal by Lindeman Island for three new resorts, 325 suites and villas for a total development cost of $583 million.

Willcox advised "our tourism industry deserves better and it is basically un-Australian for a media outlet to decide on an agenda that suits their storyline rather than present the true facts. The fact is that we now have seven resorts on islands open across the Whitsunday region most recently with Elysian Retreat, Daydream and Hayman island all welcoming guests.

“Our tourism industry offers outstanding product which is endorsed by our success in winning four national titles at the Australian Tourism Awards.”

Tourism Whitsundays lists some of the completed and in progress investment as: