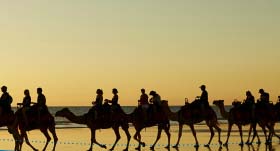 The 2014/15 Western Australian Budget has boosted funding for Indigenous tourism and Tourism Western Australia but in otherwise austere financial plans the new WA Museum appears to be one of the few other winners.

A commitment of $88.9 million to Tourism Western Australia, its biggest ever budget, has been welcomed by pro-development lobby group the Tourism & Transport Forum (TTF), which issued a statement explaining “the allocation of record funding for tourism shows that the Barnett government understands the importance of the visitor economy to Western Australia and the need to support tourism as an economic development strategy for the state.”

TTF Chief Executive Ken Morrison said this will help attract more visitors to WA, adding “tourism employs 91,000 people across Western Australia and generates $7.7 billion a year in visitor spending and with the right policy frameworks and funding support those numbers will continue to grow.

“Tourism has been identified as one of five super-growth sectors that can contribute an additional $250 billion to the national economy over the next 20 years, especially with heavy manufacturing declining and the mining investment boom waning.

“We commend (Premier) Barnett Government’s increased investment in tourism which will help to grow the visitor economy and support jobs statewide.”

The Tourism Council Western Australia (TCWA) has been advocating for increased funding for Indigenous tourism for many years and congratulated the Western Australian Government for recognising its importance with this budget commitment.

In the arts and culture, the allocation of $21 million towards building the $428 million Western Australia Museum was the only significant allocation which, excluding the capital works, saw funding for arts services cut by 1.6% to $127.3 million.

$7.8 million was also committed to upgrade equipment at cultural venues, with the money to be spent over four years on new lighting, wireless communications and other building improvements at His Majesty’s Theatre, the Art Gallery of WA, State Records Office, WA Museum and the State Library.

In recreation and sport recently announced allocations from Western Australia’s Community Sporting and Recreation Facilities Fund (CSRFF) will back the construction of a new multipurpose aquatic and recreation centre in Cockburn ($2,400,000); upgrades of the Kwinana Recquatic facility ($900,000), redevelopment of the Bridgetown Swimming Pool ($1,250,000) and construction of a new aquatic facility at Gnowangerup Recreation Complex ($700,000).

An announcement on further backing for the City of Cockburn’s planned new aquatic and sports facility is expected shortly.