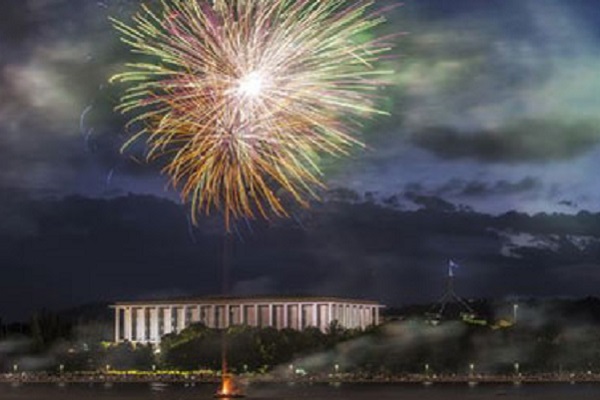 With a total fire ban declared for the ACT until Wednesday morning, Canberra's New Year's Eve fireworks displays have been cancelled.

The Bureau of Meteorology is forecasting hot, dry and windy conditions over the next few days, with temperatures expected to top 39 degrees.

Fireworks displays had been planned for 9pm and midnight as part of the New Year's Eve in the City celebrations in Civic Square.

However, Events ACT has decided to cancel the events after receiving advice from the ACT Emergency Services Agency Commissioner, Georgeina Whelan.

Commissioner Whelan told the ABC “it is a sensible decision for us not to proceed with the fireworks in the ACT.”

Given the severe fire conditions and poor air quality in Canberra, Commissioner Whelan said she would have been unlikely to provide a waiver for the fireworks to proceed, adding “we have thousands of ACT residents who actually go to the vantage points around Canberra, such as Mt Ainslie, Black Mountain, Mt Pleasant and Red Hill.

"With those vantage points only having very limited access and obviously evacuation points, and the curing of the grass in those areas, what I was most concerned was the fire risk that would be associated with that."

Thousands of people had been expected to attend the New Year's Eve celebrations in the CBD.

Verden stated "Events ACT is continuing to monitor weather conditions and smoke haze to determine if the other planned activities and live music performances can proceed without the fireworks.

"It's disappointing that we can't bring the fireworks to Canberra this year, but safety of the public remains a priority for providing a fun and safe event."

Martin Brady, whose business Fireworks Australia has put on the display for several years, said he understood the necessity of calling off the event.

Brady told the ABC “we fully understand why fireworks shows are being cancelled.

"As far as I can tell, it's been the right decision every time, as bad as it is for our industry, but (fires are) terrible for lots of industries.”

Amid calls for them to be cancelled New Year's Eve firework displays are currently set to go ahead in Adelaide and Sydney.