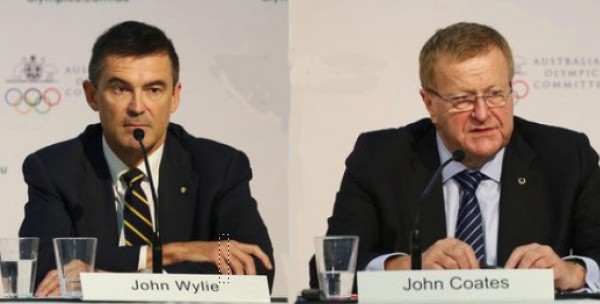 A dispute between two of Australia's most senior sports officials expanded into a public confrontation at the Nitro Athletics series event at Melbourne’s Lakeside Stadium last night.

The ABC suggested that Coates has accused Wylie of working against him, trying to unseat him from his long-held position as Australia's highest ranking Olympic official, and of lying about it when confronted.

Coates has been a longtime critic of the Federal Government and ASC’s Winning Edge sport funding strategy, going as far as criticising the program and the performance of Australian athletes during last year’s Rio Olympics.

At the end of last year, Wylie wrote to Coates proposing a "reset" of the working relationship between their respective organisations, stating "there are many areas of mutual interest and benefit in our working together.

"There is a strong need for more funding for all levels of sport in this country, from Olympic and Paralympic high performance through to grassroots community participation."

However, Coates apparently concerned at a suggestion from Wylie that “the selection process for the Summer and Winter Games' Chef de Mission roles be handled as a partnership between us in an open process involving consideration of a range of candidates," responded with a 15-page letter, published on the AOC website.

Feeling that Wylie was overstepping his authority and trying to undermine the role of the AOC, Coates wrote: "Since the ASC was established I have... relied on (former Sports Minister) the Hon John Brown's assurances that the independence and autonomy of sport would continue as Government policy and will continue to do so unless the Acting Sports Minister, Senator the Hon Arthur Sinodinos, advises me that the Minister gave you a written direction under section 11(1) of the ASC Act 1989, to interfere in the right of the AOC to free elections, to seek a role in its most senior team appointments and to see access to the AOC's Funding for joining programs with the ASC.”

Coates, who is also a Vice-President of the International Olympic Committee (IOC), emphasised that only the IOC can lay down rules to the AOC, adding “the requirement for the IOC to approve the AOC Constitution runs counter to the principle of national sovereignty which underpins the Corporations Act 2001 (Cth) and is an obstacle to the AOC incorporating as a company.”

The ABC reported “high profile sports administrators” as saying that Coates fears that Wylie is working with other heads of sports bodies to oust Coates from a position he has held for nearly 30 years.

Witnesses reported by the ABC stated to last night’s exchange as being “highly confrontational”' “uncomfortable” and “not pleasant”.

While Government interference with the AOC, an independent and autonomous organisation, could lead to the IOC suspending Australia from participating at the Olympic Games.

While the AOC receives no direct funding from the Australian Government, the ASC or the Australian Institute of Sport, it does acknowledges the critical assistance these bodies provide to both the AOC’s member national sporting federations on the Olympic program and to athletes directly for their preparation for the Olympic Games.