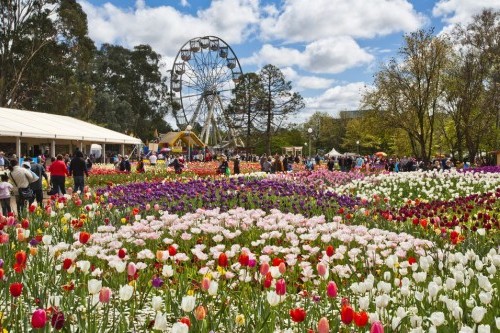 Announcing details of its 2018 edition, the organisers of the Toowoomba Carnival of Flowers have announced record visitation of 255,639 people who attended the internationally acclaimed event in 2017.

With the 2018 event to be held from Friday 21st to Sunday 30th September, organisers are well into finalising program highlights for the 10-day celebration, one which attracts visitors from all over Australia as well as internationally.

Attendance across the 10-day event skyrocketed in 2017 with overall figures up by 29% with 255,639 attendees recorded.

Toowoomba Regional Council Mayor Paul Antonio advised “the opening weekend of the event set the scene early, with record breaking crowds on Saturday and Sunday and hundreds of thousands enjoying the brilliant spring sunshine, the Grand Central Floral Parade and the almost 200,000 blooms covering the city’s parks and gardens.”

This win at the Queensland Tourism Awards nominates the event to represent Queensland at the national awards for the second year in a row, to be held at the end of next month in Perth.

Queensland Tourism Industry Development Minister Kate Jones said the latest figures reinforced the carnival’s status as a leading Queensland event, commenting “the Toowoomba Carnival of Flowers is Australia’s longest-running horticultural event and the great turnout in 2017 is evidence of its growing popularity.

“The Carnival is an integral part of Toowoomba’s identity and provides a unique experience that has become popular with visitors the world over.”

First staged in 1949, the Toowoomba Carnival of Flowers was introduced as a way for the city to use its ‘Garden City’ reputation to promote increased economic activity following the then recent hardships of war.

For more information go to www.tcof.com.au