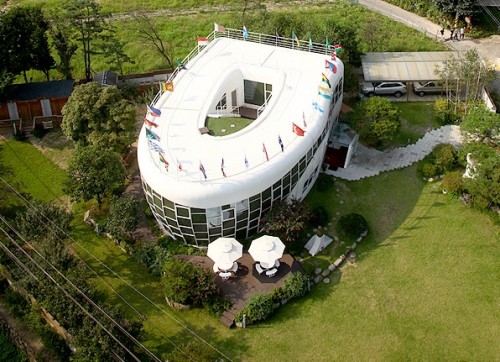 The world's first toilet theme park has opened in the Korean city of Suwon.

The unusual attraction, which officially opened on in July last year, started life as the vision of former Suwon Mayor Sim Jae-duck, known as 'Mr Toilet' thanks to his efforts to improve the city's toilets for the 2002 FIFA World Cup.

Sim also helped found the World Toilet Association, which is dedicated to improving sanitation around the world.

In 2007, Sim constructed the world's first toilet-shaped house in Suwon, in which he lived until his death in 2009. After he passed away, the house was converted into a museum, documenting the world's water closet culture through men and women's bathroom signs from around the globe, photographs of public toilets and information about the importance of sanitary bathroom facilities.

The museum was expanded into a full-fledged theme park in 2012, complete with scatological sculptures and different styles of toilets, such as squat toilets traditionally used in Korea, European chamber pots and historical urinals shaped like little four-legged creatures with a round hole in place of a face.

While visitors are welcome to mimic relieving themselves (making for some fun photo opportunities), the park has its own set of modern bathrooms available for the real thing. The park does not have traditional rides, but guests are encouraged to interact with the exhibits and various sculptures.

The park, located about an hour outside of Seoul, opens from 10am to 6pm daily, and is closed Mondays. Admission is free, though the museum accepts donations to continue its mission to improve toilet hygiene and education.