Melbourne's theatre industry claims it is being damaged by ticket reseller sites with the General Manager of Melbourne's Her Majesty's Theatre expressing concern at how ticket reselling ins impacting theatre partrons.

Ticket reselling websites have caused outrage among music fans and led to complaints being made to the Australian Competition and Consumer Commission (ACCC) over highly inflated prices.

Swiss website Viagogo and Australia's Ticketmaster Resale are the subject of a complaint to the ACCC alleging misleading and deceptive conduct, while other sites Queen of Tickets and TicketBis have also criticised.

Mark Rowe, General Manager of Melbourne's Her Majesty's Theatre, said he believed the practice had been happening for the past two years and action was long overdue.

Rowe told the ABC “we're sick and tired of the public being what we believe to be deceived.”

Rowe said patrons have often used reseller sites, believing they were the official ticketing agency, and paid exorbitant prices without realising, advising “one customer paid $589 for three tickets that should have cost him $221.”

The problem is that ticket resale websites generally appear first in search engines, and some do not appear to be resellers. 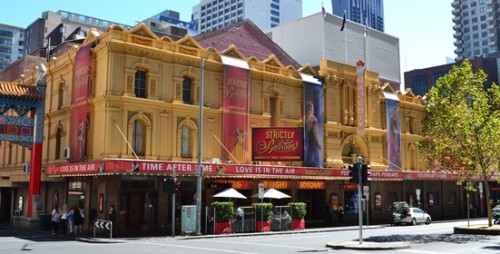 Rowe feels that, as a result, Her Majesty's Theatre is losing customers, citing a recent example when the best tickets to Singing in the Rain cost $110 from the theatre's official provider, but tickets were selling for $265 on another reseller site.

Rowe explained "someone that doesn't go the theatre very often or perhaps have never been at all, wanted to see Singing in the Rain they type it in and say, 'geez, we're not going to pay $265 a ticket', and why would you.”

The false belief that reselling websites were official providers also hurt theatres, he said, when they had no tickets left for sale, but the theatre did.

Her Majesty's Theatre also had evidence that scammers using reselling websites were advertising tickets, before they had even bought them from the theatre.

Rowe said he was disgusted by the way scalpers abused his industry, concluding “it's upsetting particularly for me. I've been in the business a long time. I've worked hard.”