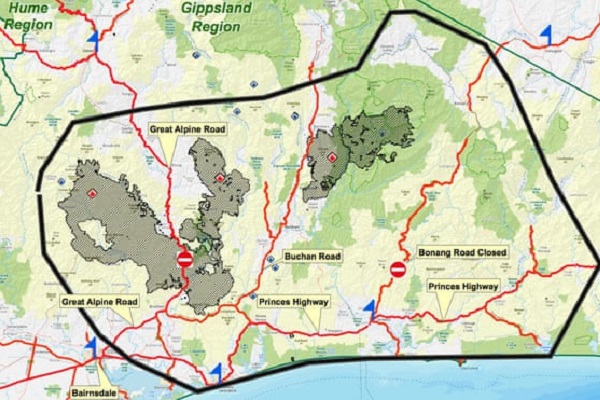 Victorian authorities have told thousands of visitors and residents in East Gippsland to leave immediately as the areas faces a historic bushfire threat.

Victoria’s Emergency Management Commissioner, Andrew Crisp, issued the order today (Sunday 29th December) ahead of what the Bureau of Meteorology has called one of the “significant fire weather days in Victoria’s history”.

As of today, there were three active fires in east Gippsland, covering a combined area of more than 130,000 hectares, leading to an evacuation warning being issued for the east Gippsland town of Goonergah, which is surrounded by high-value old growth forests.

East Gippsland is popular with campers and holidaymakers over the New Year period. Up to 30,000 people are on holiday at Lakes Entrance, 300 kilometres east of Melbourne.

As reported by The Guardian Australia with AAP, Crisp advised that the Princes Highway, the main road in and out of the area, was likely to be affected by fires on Monday while the Great Alpine Road, the other road out of East Gippsland, is already closed due to bushfires.

Crisp advised “what we are saying now, based on the conditions that will be confronting us tomorrow across the state, but in particular in east Gippsland, is that if you’re holidaying in that part of the state, it’s time that you left.

“We want to give people time to leave east Gippsland now. So if you’re camping, if you’re in a holiday home, it is time … to leave this afternoon.”

Emergency Victoria outlined a potential impact zone - covering an area half the size of Belgium - beginning just east of Bairnsdale and extending south along the coast to Cann River and then north to the NSW border. North of Bairnsdale, the impact zone stretches up to Omeo and then cuts back to the Deddick Valley.

The total affected area is about 15,000 kilometres².

Everyone in East Gippsland must leave the area today due to the fire danger forecast for tomorrow. Do not travel to this area. It is not possible to provide support and aid to all the visitors currently in the East Gippsland region.

People who live in east Gippsland have been advised to stay with family or friends in Bairnsdale or other larger towns, and to leave no later than Monday morning.

Crisp said Parks Victoria was considering closing national parks in the region and warned that camping in a national park was “the last place you should be”.

He added “we are giving you fair warning: you should not be in the parks,” he said. “You might think you know where the fires are. There could be fires that start and they could be close to you. You might not find a way out of where you are at the moment.”

Crisp said 550 state forest firefighters and 300 Country Fire Authority volunteers were standing by as well as 70 helicopters and water-bombing aircraft, but “there isn’t enough trucks to go around”.

The fire danger is forecast to be extreme in seven of the nine districts of Victoria, and severe in the remaining two, which includes east Gippsland.

Kevin Parkin, a Senior Meteorologist with the Bureau of Meteorology, said Monday was “likely to be one of the significant fire weather days in Victoria’s history”.

Parkin said temperatures were forecast to top 40C across most of the state, including Melbourne and parts of East Gippsland, but the dangerous fire conditions were due to a wind change that would reach the south-west coast between 1pm and 2pm, and would reach the Gippsland fire grounds near midnight on Monday.

South Australia also faces a potentially catastrophic day on Monday in three districts, including the Adelaide Hills, where a large blaze continues to smoulder.

Catastrophic conditions will stretch across the Adelaide Hills, through the mid-north and across to Yorke Peninsula.

The final two days of the Falls Festival in Lorne, south-west of Melbourne, were cancelled earlier today in anticipation of the extreme fire risk.