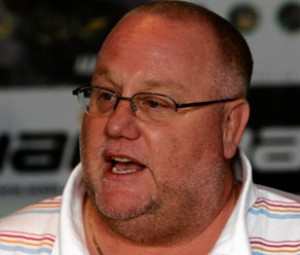 Australian swimming's National Head Coach Alan Thompson has been forced out of his position by the board of Swimming Australia.

The sport's national ruling body announced in a press release last week that it had restructured Thompson's position, splitting his duties between a head coach and a high-performance manager.

Thompson, who was already fighting an anonymous accusation of inappropriate behaviour, was unwilling to accept a reduced role and has accepted a redundancy after five years in the job.

In a statement issued following his departure, Thompson, who presided over highly successful world championships teams in 2005 and 2007 and led the Australian team to its biggest medal haul at the 2008 Beijing Olympics, said he did not believe in Swimming Australia's future direction.

"I do not agree with the way the National Head Coach and High Performance Unit has now been structured by Swimming Australia, and I still believe the best way forward was for the roles to remain as one - something which has certainly proved successful," the statement said.

"Alan has done a great job for the sport but he wanted the jobs to be kept together and the board wasn't prepared to do that," Urquhart said.

Following Thompson's departure, The Australian newspaper reported that "it has been well-known for some months that Thompson had lost support among (Swimming Australia) board members concerned that he had become too powerful within the sport. However, he has been the only Swimming Australia official willing to take a strong public stand on major issues affecting the sport, including the need for a ban on high-tech swimsuits."

Thompson's departure is apparently unrelated to claims of "inappropriate" behaviour at the Australian Swimming Coaches Association annual conference at the Gold Coast in 2007. Revealed in November last year, Thompson took personal leave while the matter was being investigated by Swimming Australia.

That news of the investigation emerged on the same day that allegations of child abuse were made against late swimming coach Terry Buck was seen as being very damaging to Thompson, as the two events were completely unrelated. Thompson's "inappropriate" behavior is understood to have related to remarks made to the wife of a Swimming Australia board member.

That Thompson investigation is continuing and is not expected to conclude until the end of February.

It is understood that Thompson is being pursued by the Swedish Swimming Federation to take on the role of national head coach.