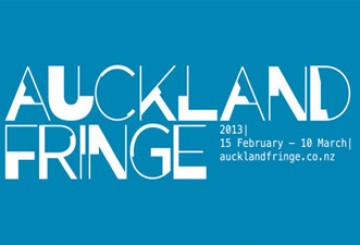 Held every two years, and with shows generally running for just a few days or less and venues seating around 100 people, tickets during the 24 days of Fringe can generally be categorised as 'Strictly limited' and 'Will sell out'.

In the coming weeks, Auckland Fringe 2013 will feature:

Fringe in the Park, the opening event of the fringe, is set to Myers Park burst at the seams with activities for the whole family, refreshments, lost islands and scores of fringe acts sharing their spoils;
Après Ski is Auckland Fringe's late night variety show;
The Pineapple Jukebox Dance Show - an interactive dance show on for four evenings at the Q Theatre.

Other performances will include:

Swan Song
Til undeath do us part

Auckland Fringe is presented by THE EDGE alongside core partners ASB Community Trust and the K Road Business Association who continue their support for Auckland Fringe into 2013.

Auckland Fringe runs concurrently with NZ Fringe in Wellington and is closely followed by the Dunedin and Hamilton Fringes, creating a nationwide touring network.

For more information go to www.aucklandfringe.co.nz