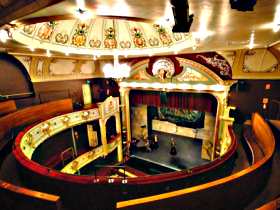 The announcement was made during last week’s 28th annual APACA conference being hosted in Hobart.

The other finalists for the award included Mandurah Performing Arts Centre (winner of the 2013 award) and Colac Otway Performing Arts & Cultural Centre (previously nominated in 2009).

First introduced in 2003, the Drover Awards recognise and celebrate the contribution made by Australia’s best performing arts touring talent. The ‘Performing Arts Centre of the Year’ acknowledges the achievements of an outstanding peforming arts centre who works with production companies to provide consistently outstanding production, marketing and management services and has achieved exceptional success in audience development and community engagement.

The ‘Performing Arts Centre of the Year’ was determined through a process of nominations from producers having toured to a minimum of five APACA venues.

Nominations were submitted to an expert panel of industry peers to determine the winner. Deliberation for the 2014 winner was a long process as the three performing arts centres finalists (there were 18 nominations) were all viewed as having made exceptionally professional contributions to the touring program for various arts companies.

APACA Executive Director Rick Heath says that the Drover Awards are an important accolade for the intense work that goes into presenting shows and running arts centres.

Heath explains “this award acknowledges presenters who not only offer exceptional operational standards but recognise their role in building commmunities and providing support for performance makers.

“There is an incredible amount of hard work that goes on behind the scenes when bringing a show into a centre, work that the majority of people never see or are aware of, but the Drover Awards are one way that we can acknowledge arts professionals like those at the Theatre Royal and the dedication they demonstrate.

“The Theatre Royal, Hobart were acknowledged by the judging panel as a venue with a strong commitment to audience development and community engagement. It was also noted that their staff provided exceptional service to touring parties from all arts genres.”

Opened in 1837 and the oldest continually operating theatre in Australia,  Theatre Royal is a truly historic performing arts venue in central Hobart.

Noël Coward once called it "a dream of a theatre” and Laurence Olivier launched a national appeal for its reconstruction in the 1940s.

The 2014 Drover Awards also saw Robert Love named Touring Legend 2014 for his outstanding contribution to performing arts touring and his commitment to developing the industry over many years.

The award recognised Love’s  recent intiatives at Parramatta Riverside Theatre that included the refurbishment of the building and facilities and reinvigorating the performance, education and events program initiating the Big Laugh Comedy Festival (2001to 07), an enlarged annual subscription season of theatre, dance and opera, a schools and family program, a music series, Big Notes, and extended the Parramatta programs of the

‘Jack Charles V The Crown’ by Ilbijerri Theatre Company and ‘Animal Farm’ by shake and stir Theatre Co with were named as the joint winners of the Tour of the Year 2014 Drover Award.

The 28th APACA conference was held in Hobart from 1st to 4th July.