Theatre Forum proclaims ‘Motion of No Confidence’ in the Australian Government 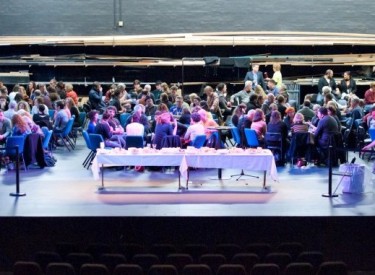 The 2015 Australian Theatre Forum (ATF) ended their meeting last week with delegates releasing a 'Motion of No Confidence' in the current Australian Government.

At the close of the four-day Forum, ATF curator David Williams and writer Vissolela Ndenzako jointly read aloud a Motion of No Confidence in Australian Prime Minister Tony Abbott's Ministry.

In the wake of recent arts funding cuts made by the Federal Government, political and fuding issues were not a major part of ATF 2015 program, although debate about political challenges to art and culture did feature in many debates and discussions at the Forum.

However, at the close of the event, held at the Seymour Theatre, Sydney from 20th to 23rd January, 52 ATF delegates backed the motion.

Award-winning theatre maker Williams, the curator of ATF 2015, told Richard Watts of the Performing Arts Hub “as a political gesture, it’s symbolic at best (and) I’m not naive enough to believe that this is going to change anything.

“But it was difficult to get to the end of the Forum after speaking so much about the political threats to our society and culture and not make any kind of gesture.”

The text of the motion read:

“We, the undersigned delegates of ATF2015, voice a motion of no confidence in the actions and ideology of the Federal Government currently led by Prime Minister Anthony Abbott.

“This motion is voiced due to our extreme concerns regarding the widespread and devastating attacks on our social infrastructure, and the sustained cuts upon the very underpinning of Australian civil society.

“In voicing this motion we, the undersigned delegates of ATF2015, are not merely motivated by the widespread cuts to national investment in the arts and culture. Rather we are compelled to respond by our urgent concerns about the ideologically-driven erosion of our collective social fabric, which, unless checked, will radically reduce our capacity to hope, dream, imagine, build and share.

“The irreparable social and cultural cost to the future of this nation will be felt for generations and must be urgently resisted.”

For more information go to www.australiantheatreforum.com.au/atf-2015/

14th May 2014 - BUDGET CUTS INTO FEDERAL ARTS AND CULTURE FUNDING