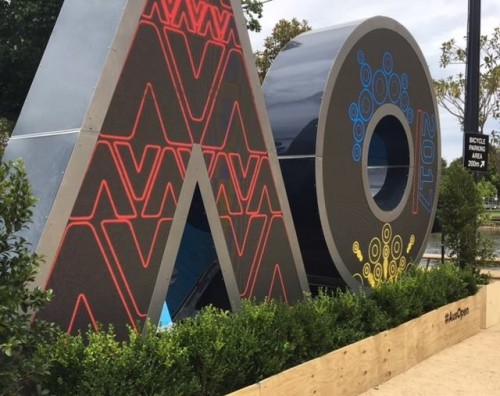 With the Australian Open’s new logo and branding rolled out for the 2017 tournament, Sydney-based The P.A. People produced a large three-dimensional logo at Melbourne Park, complete with a video screen on its front and LED pixels covering the side surfaces.

As part of their pitch for the rebranding of the Australian Open, Landor, Tennis Australia’s branding agency, had created a video rendering of their proposed logo. The rendering depicted a 3 metre high three-dimensional logo, complete with a video screen on its front and LED pixels covering the side surfaces.

While not part of Landor’s original pitch, the concept inspired Tennis Australia to test the market to see if it were possible.

The technical team at Tennis Australia prepared and issued a specification in August last year and The P.A. People, who had worked with Tennis Australia on many events over the years, took up the challenge.

Chris Dodds, Managing Director of The P.A. People and lead designer of the AO logo project explained “our experience in designing bespoke mechanical solutions as part of AV systems integration, coupled with our work around the world on large scale events, led us to believe we could create a viable and cost effective solution.”

Australian Open Head of Marketing Jo Juler added “The P.A. People took a concept and brought it to life with an extraordinary feat of engineering.

“The AO installation became a cornerstone of our international brand roll out and it captivated our audiences with its sheer size and stunning imagery. The team at The P.A. People are to be commended for working with us on such a complex project in such a short timeframe; the evidence of its success is in the exposure the installation had during the tournament.” 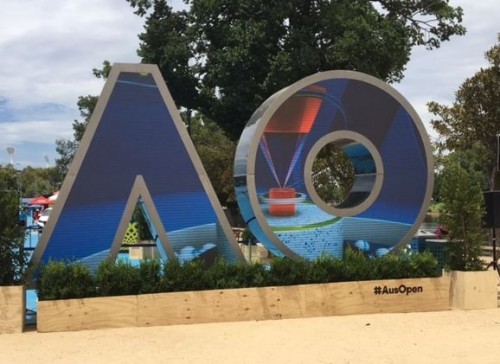 As Dodds outlines, The P.A. People’s approach was based on a stainless-steel space frame structure, similar to the construction of an airframe. Each of the 440 pieces of stainless steel was laser cut and folded from one of 230 separate patterns and then assembled in our workshop with a combination of bolts and rivets. The fabrication did not rely on a frame per se - rather, a combination of flat 3mm panels and lateral spokes or ribs provided the structural integrity required. We chose stainless steel to provide a durable and elegant surface for the logo over time - we felt that paint was simply not an option given its proposed deployment in public spaces.

The side surfaces are a combination of grey tinted polycarbonate and a specially imported acrylic diffuser, selected to enhance the look of the 1,900 triple chip LED pixels that surround the body of the AO logo.

The 3.9mm pitch outdoor LED screen is accessible from the front of the unit for maintenance, while the server and interconnections are accessed through lockable rear hatches.

The assembled screen is some 3.2m high, almost 7m long and 850mm deep. It weighs some 2.5tonne. The system is designed to fit in its own 20’ High Cube shipping container, incorporates its own media server and sound system and is complete with its own stage.

The P.A. People signed its contract for the device in early October and delivered the unit in time for the Australian Open in January.

It was a tight time line, but with the help of The P.A. People’s specialist metal fabrication partners and screen supplier, the package was delivered on time.

As Dodds concludes “Tennis Australia arranged some exceptional content, through both Sydney-based animation agency ‘Looper’ and Tennis Australia’s own media team, which brought the logo to life.

“Without the fantastic content the screen would have been an elegant sculpture. With the imagery, it became the focus of the entry to the Australian Open Festival in Birrarung Marr and gained a significant level of social media coverage in its own right.”