The Aussies return to Perth in 2018 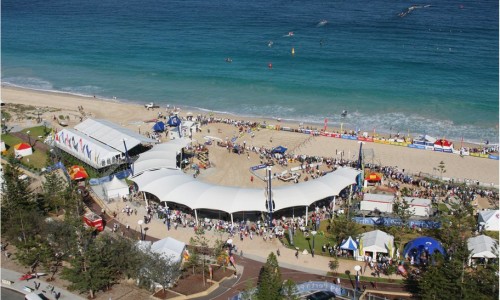 The world’s biggest surf sports carnival will return to Western Australia following the announcement of Scarborough Beach as the host of the 2018 Australian Surf Life Saving Championships.

It will be the first time The Aussies will be held in Western Australia since the highly successful Championships held at Scarborough Beach in 2014.

Announcing the hosting, Surf Life Saving Australia President Graham Ford stated “we are delighted to confirm we are headed back to Western Australia. The Aussies is a truly national event and it is fantastic that our athletes, officials and volunteers have the opportunity to experience the incredible conditions and hospitality of the west coast.”

“It was a brilliant event when we were last in Western Australia in 2014 and I have no doubt 2018 will surpass even the high standards that were set then.”

Western Australia Premier and Minister for Tourism Colin Barnett said securing The Aussies was a major coup for Western Australia, adding “when the Championships was last held at Scarborough in 2014, it attracted almost 8,000 visitors who spent $12.4 million during the seven days of the event.

“We’re hoping to see another great turnout and economic boost when the championships return in March 2018.”

With the Scarborough foreshore undergoing a major redevelopment, hosting the event will showcase the new look of the famous beach.