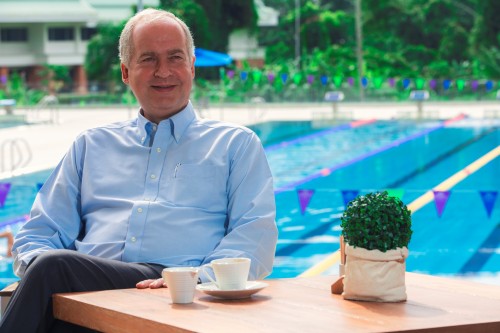 Thanyapura Phuket President and Chief Executive, Philipp Graf von Hardenberg, has been named as one of Forbes Asia's 40 Heroes of Philanthropy for giving underprivileged children a much-needed boost through the post-tsunami establishment of the Yaowawit School and Lodge in Phang Nga, Thailand.

The German national – who has reinforced Thanyapura's standing as Asia's leading sports training, education and healthy lifestyle institution since coming on board in February 2014 – is joined on the ninth annual list by the 'most noteworthy givers' from 13 Asia Pacific countries, people 'who have compiled a long record of supporting worthy causes'.

He explains “it's a huge honour to be included on the Heroes of Philanthropy list along with many other people who have given their time and resources to help those who need it the most.

"But at the Yaowawit School it has always been about a team effort. From day one our team has worked passionately, tirelessly and with a big heart to turn my vision into a successful reality – 10 years on and going stronger than ever.

"Given we're a self-funding, government-approved boarding school, we rely on the kindness of others.

“Luckily, we have received amazing support from our generous partners, donors and sponsors from around the world, with more than US$5 million raised since the school opened in 2006.

“Our goal is to become more and more self funding by introducing several social entrepreneurship businesses but until then, we depend on donations from Thai organisations and people. I'd also like to thank the other members of our team – the staff, the guardians, the friends, the board members and, last but certainly not least, the children. Well done all of you!"

Graf von Hardenberg said running Thanyapura was another way for him to give back to Thailand and beyond, introducing the venue's unique, world-class amalgam of sport, health, mind and education to a global audience of elite athletes and amateur enthusiasts.

Pristine environment: Thanyapura is an extensive 23-hectare state-of-the-art facility in the northern part of the tropical island of Phuket.

Other names on the Heroes of Philanthropy list include Nepal billionaire Binod Chaudhary, who was a whirlwind of action following the 2015 Nepal earthquake, such as turning his eight schools into shelters and facilitating food, water and medical supplies. Australian billionaire Len Ainsworth made the list after donating US$30 million to hospitals, universities and other causes over the past three years, while in 2014 husband and wife billionaires Pan Shiyi and Zhang Xin from China pledged USD 100 million to fund overseas study by Chinese undergraduates at the world's top universities.

From 1996 to 1999 he headed the Advisory and Executive Board of the International School Berlin/Brandenburg, Berlin's only International School had been mismanaged into bankruptcy but following its repositioning under Graf von Hardenberg its enrolments doubled in three years.

He was a manager at Hotel Le Beau-Rivage, Lausanne, The Savoy Hotel, London and the Hotel Gravenbruch Kempinski, Frankfurt, before joining Ritz-Carlton Hotels in 1987 and becoming its Senior Vice President for Development and Operations in 1993.

Thanyapura is set on 23 hectares of pristine land at the foothill of a national park. It is located near Phuket International Airport and the island's famed beaches, with its elite coaches augmented by world-class sports scientists, medical and health practitioners, physiotherapists and chiropractors.