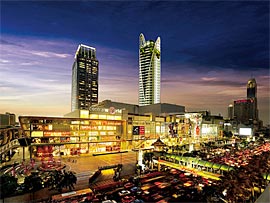 Thailand's Government says the nation is still a safe holiday destination for Australian tourists, despite reports of 10 Syrians with links to the Islamic State (IS) group entering the country.

A Russian intelligence report marked ‘secret’ and ‘urgent’ was sent in late November from Thailand's police intelligence unit to various investigative branches, and later leaked to the media.

It cites intelligence from Russia's Federal Security Service (FSB), warning the Thai Government that 10 Syrian members of the IS group slipped into Thailand in October and were planning to attack Russian targets.

Commenting on the warning, Anthony Davis, a Bangkok-based analyst with security group IHS Jane's, stated “in the aftermath of the downing of the Russian airliner in Sinai, the FSB would be, to put it bluntly, in panic mode.

"They would be looking at areas of Russian vulnerability globally, and particularly areas that concern large numbers of civilians.

“Thailand would be pretty close to the top of the list there."

With tourism being a major part of the Thai economy, and the country being a popular destination for Russians, the Thai Government fears a decline in tourism confidence.

The Thai Police memo said two of the Syrians disappeared from sight, but four of them travelled to Pattaya, two to Phuket, and two to Bangkok.

These are places visited by hundreds of thousands of international visitors each year, including Australians and New Zealanders, providing a potential target for would-be terrorists.

Davis said tourism was one of several security vulnerabilities in Thailand, who told the ABC, “we have large numbers of Chinese, very large numbers of Russians, of westerners, of Australians - you name it, they're here - so it's a target-rich environment.

"Secondly, Thailand labours under the baggage of being, still, a permissive environment, and that involves two particular areas: one, of official corruption, and the other is the presence in this country of transnational criminal groups.

"And both of these areas of vulnerability were underscored in the terrorist attack at the Erawan shrine in central Bangkok on the 17th August this year."

The bombing outside the busy Erawan shrine in downtown Bangkok killed 20 people and injured more than 120 more.

The Thai Government is playing down the leaked memo, and said it was part of normal intelligence sharing.

A spokesperson for the Thai Government stated “it doesn't mean that we have the imminent ISIL threat in Thailand, but I can assure our foreign visitors to come to Thailand, and Thailand is still a safe place to come to.”