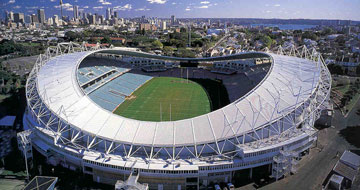 Test and international rugby will return to the Sydney Football Stadium (SFS) in 2012 following a ten-year agreement reached between the Australian Rugby Union and the SCG Trust.

The new agreement will see the Wallabies play Wales at the SFS next year followed, in years to follow, with Tests against France, England, Ireland, Scotland or Italy.

The British and Irish Lions will also be seen in action against the NSW Waratahs at the SFS in 2013.

The Wallabies' last played at the SFS against the Barbarians in 2009.

The Wallabies' last Test at the SFS was a memorable 19-14 victory over the New Zealand All Blacks in 1998 - a match which saw the Australians complete a 3-0 Bledisloe Cup series whitewash.

Since the first rugby Test was played at the SFS in 1989, where the Wallabies defeated the Britisn and Irish Lions 30-12, Australian has enjoyed an outstanding home ground record with victories over South Africa, England, Wales, Scotland, Ireland, Manu Samoa, France and Argentina.

In total, Australia has played 24 matches at the SFS, including 22 Tests. Additionally, six Rugby World Cup fixtures were played at the SFS in 2003.

SCG Trust Chairman, Rodney Cavalier, said the agreement marked a great day for Trust members and Australian rugby fans, stating "rugby supporters have been calling for Test rugby to return to the SFS for many years. Those wishes will now be met.

"The first international rugby match was played between the Lions and NSW in 1888 and it will be appropriate that two teams will celebrate the 125th anniversary of that match in 2013."

ARU Managing Director and Chief Executive John O'Neill said rugby has enjoyed wonderful moments at the SFS, adding "everyone who follows rugby, and most people who follow sport in general, will also remember the night in 1994 when George Gregan made his famous tackle in the south-west corner of the ground as the Wallabies again downed the All Blacks to win the Bledisloe Cup."

The date and kick-off time of the Wallabies' Test against Wales at the SFS next year will be announced when determined by the ARU.