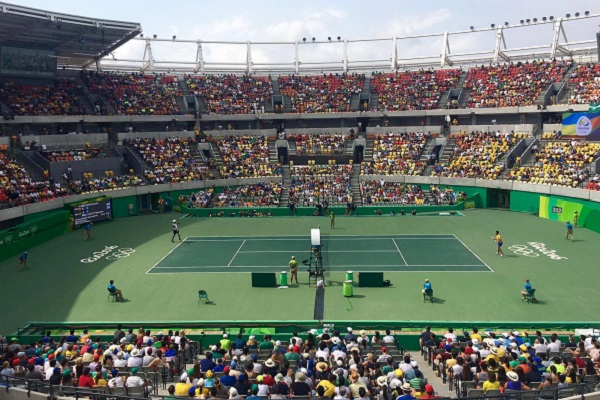 Work currently underway at Melbourne Park, the home of the Australian Open, will see the installation of a new acrylic hardcourt surface, from Spanish-based manufacturer GreenSet Worldwide for the 2020 tournament.

Set to replace the distinctive blue Plexicushion surface in use for the Australian Open since 2008, the surprise change follows a competitive tendering process which is believed to have seen Tennis Australia make significant changes to previous surfacing contracts.

With the installation not yet announced by Tennis Australia, GreenSet is an acrylic hardcourt surface used in many professional tennis events run by the International Tennis Federation (ITF) and on the ATP and WTA tours.

These include the Paris Masters, Swiss Indoors, ATP Finals at the O2 Arena in London and many Davis Cup and Fed Cup ties.

It was also used for the Rio 2016 Summer Olympics and 2016 Summer Paralympics with GreenSet also supplying the BMX surfaces for the Olympic BMX Centre in Rio.

Having installed over 60,000 tennis courts around the world since 1970, GreenSet was acquired in 2000 by former professional tennis player and current company President Javier Sánchez Vicario.

It is made of layers of acrylic resin and silica on top of an asphalt or concrete base, for permanent facilities, or on top of a wooden platform, for venues with occasional use.

The implications of the change for tennis in Australia are significant as facilities across Australia have installed Plexicushion surfaces since 2008 in order to be consistent with facilities at Melbourne Park.

GreenSet Worldwide currently works with Queensland-based Aura Sports but has yet to announce an Australia-wide network of distributors and installers.

Tennis Australia and the office of Victorian Premier were contacted for input to this item but had not responded at the time of publication.