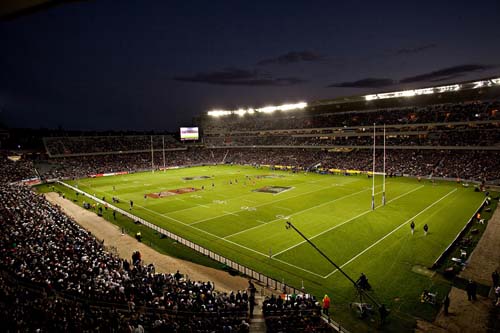 New Zealanders' growing love for smartphones was demonstrated at Eden Park last Saturday night (14th September) as rugby fans in the stadium used their mobiles to share their key moments of the All Blacks v Springboks test.

Telecom NZ highlighted that fans uploaded around 14,000MB of mobile data - the equivalent of posting more than 9,000 photos on Facebook - in the lead-up to and during the test.

Those who surfed the internet during the game, to impress their fellow fans with player statistics or check out what was being said on Twitter, downloaded around 25,000 MB of mobile data - enough to download a 30 second try reply about 3,700 times.

Telecom NZ also saw around 150,000 texts sent by the crowd at Eden Park over the course of Saturday night.

Quin stated "more than 60% of our customers now own a smartphone of some shape or size. That number is growing substantially every year as better and cheaper devices hit the market.

"Kiwis love to show their support for our favourite sports teams, and so it comes as no surprise that we would do this over the network as well as by cheering the boys on in the ground itself."

Quin added that Telecom saw a huge peak in data consumption before the game began, at half time and then again at the final whistle. Texts on the other hand were sent fairly consistently during the course of the game as fans celebrate (or debate) key moments, but dropped off shortly after full time.

Telecom NZ's data for Saturday night was for total traffic across all mobile networks.