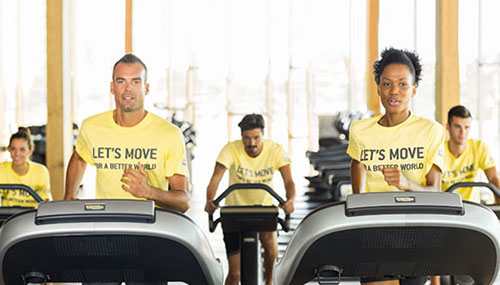 Leading international fitness equipment supplier Technogym will be staging the second edition of its 'Let's Move for a Better World' campaign from 2nd March.

Focused on promoting and tracking exercise among end-users and fitness facilities throughout the world, the innovative campaign aims to encourage members at fitness facilities to become more active - with the added social cause of giving back to their local community.

Fitness facilities from all over the world can compete in Let's Move for a Better World. Simply, members at participating fitness facilities will accumulate MOVEs (Technogym's metric of movement) by exercising on Technogym cardio equipment.

The fitness facility that accumulates the most total number of MOVEs during the allotted time period of the campaign is deemed the winner and will receive the opportunity to donate a set of Technogym Easy Line equipment to a local school of their choice in addition to a seminar promoting healthy lifestyles.

Fitness facilities participating in the 'Let's Move for a Better World' campaign can benefit in many ways. The campaign itself provides an opportunity to attract new members through an enticing incentive while also entertaining current members through a fun and interactive competition.

In turn, members benefit with an extra motivation to better their own health while also personally contributing to a cause that can positively impact their own community.

Let's Move for a Better World is the culmination of Technogym's 20 year commitment to Wellness as an opportunity to build a more sustainable society based on individual health and well-being.

All facilities that wish to participate will need to meet the participation requirements by 2nd February 2015, with registration for the campaign needing to be undertaken by the member of staff who is registered as ‘Facility Director’ on MyWellness Cloud.