Technogym helps Melbourne School to Move For a Better World 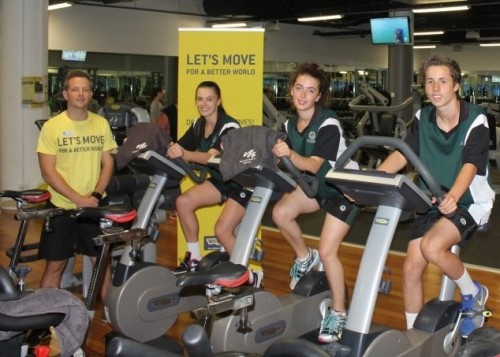 As part of Technogym's Let’s Move For a Better World Campaign, the leading fitness equipment manufacturer has teamed up with Melbourne aquatic and recreation facility WaterMarc to donate $10,000 worth of Technogym’s ARKE functional equipment to the Montmorency Secondary College.

WaterMarc ranked second among Australia's participants in the 2015 Let’s Move For a Better World Campaign.

The Banyule facility contributed with 1.6 million MOVEs (Technogym’s unit of measure for movement) during the global charity initiative to raise awareness for childhood obesity.

WaterMarc’s recognition for this achievement included a donation of Technogym equipment to a school of their choice, with the facility choosing Montmorency Secondary College more than 700 students at the school now set to embrace a more active lifestyle following the installation of the state-of-the-art gym equipment.

On Wednesday 12th August, the College hosted an Award Ceremony as part of the 2015 Let's Move For a Better World campaign, with staff from Technogym Australia, WaterMarc and Belgravia Leisure presenting the equipment to students, a delegation of teachers and College Principal Allan Robinson.

This is the second year in which Technogym and WaterMarc have donated fitness equipment to a local school, with Eltham’s St Helena Secondary College being the beneficiary in 2014.

Let’s Move for a Better World is a worldwide interactive competition created by Technogym that calls upon fitness facilities to join in and put their members’ training to good use. Over 79,000 people in 356 fitness clubs across 17 countries participated in the 2015 edition, collecting more than 300 million MOVEs.

At the ceremony, Technogym National Key Accounts Manager Chris Ablett stated "the Let’s Move campaign is the result of Technogym’s 30-year long commitment to improving healthy habits around the world.

Click here to a watch video highlights of the campaign.

Facilities can pre-register their facility for the next edition of the Let’s Move For a Better World Campaign which will start in March 2016 on the same website.