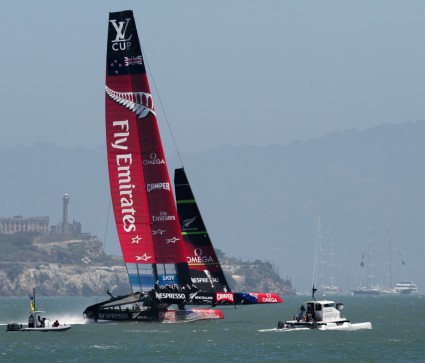 The claim was made earlier this week by the New Zealand Labour Party's Sport and Recreation spokesperson Trevor Mallard, who stated "the design team behind Team New Zealand is a high-tech brains trust. It is probably the best design team in the country and exactly the type of innovation the Government should be supporting.

"Team New Zealand has raised offshore all but the $36 million allocated by the previous government and the resulting PAYE and GST means that New Zealand has had massive publicity at no net cost to the taxpayer."

Meanwhile, Sport and Recreation Minister Murray McCully congratulated Team New Zealand on their win, adding "Team New Zealand's impressive run in the challenger series will stand them in good stead as they prepare to race Oracle for the America's Cup next month.

"Captain Dean Barker and the crew have remained composed and professional throughout the regatta, all while maintaining a strong lead.

"Luna Rossa, Team New Zealand's design and training partners, have been gracious opponents and I am pleased to hear they have agreed to help Team New Zealand fine tune their boat as they attempt to regain the Auld Mug."