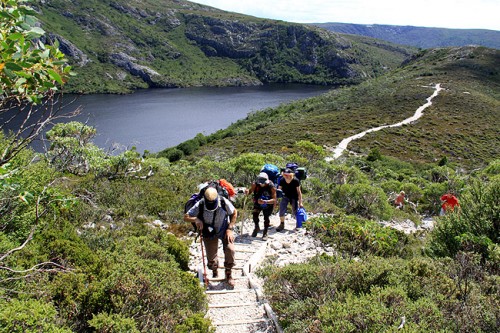 Bushwalkers will be able to hike directly from central Hobart into the Tasmania's South-West wilderness on a new walk proposed to rival the iconic Overland Track.

Backed by the Tasmanian and Federal governments, the new 80 kilometre all-weather walk would take travellers over Mt Wellington across ridgetops to the pristine mountains of the Snowy Ranges in the Huon Valley.

Largely using existing tracks, the high-level walk would treat travellers to some of the Tasmania's most stunning mountaintop views and could provide a much-needed boost for communities hit by the downturn in the timber industry.

The trip would take visitors through areas currently little-known to all but the most hardcore of bushwalkers and through forests which will be protected if the forest peace deal proceeds.

It would also offer opportunities for shorter section walks, as road access is close to most sections.

As yet it is not certain if hut-based accommodation would be offered for walkers, as is available on the Overland Track and on the Tree Capes Track presently under construction.

The latter walk is projected to attract 10,000 walkers a year, as well as inject $188 million a year and create 1,563 jobs for the Tasman peninsula.

The Federal government has agreed to pay for a feasibility study into the Wellington Ranges track with $20 million of funding available under the Intergovernmental Agreement (IGA) on Forestry.

The feasibility study will test the potential cost and economic benefits and environmental case for an all-season walking and ecotourism track from Hobart over Mt Wellington.

Tasmanian Premier Lara Giddings said Tasmania's existing walks attract a significant number of visitors to the State and that her Government is keen to build on Tasmania's reputation for world-class wilderness experiences, which is why were investing in projects like the Three Capes Track.

This funding will help determine whether another iconic walk can be created that could see people leave the Hobart waterfront on a trek that takes walkers along the Plenty Link Road saddle to the Snowy Range in the States West.