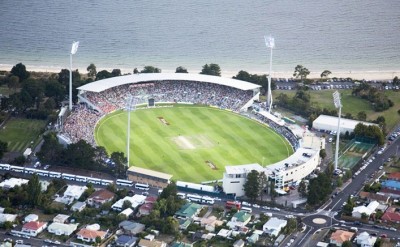 The Tasmanian Government will not financially support an AFL club to play home matches in Hobart.

Richmond is looking at playing home games at the cityâs Bellerive Oval, but with no State Government support the task of luring a team to Hobart, while not impossible, makes it considerably harder.

State Premier David Bartlett explained last week that Hawthorn, which gets $3.4 million of Tasmania Government money a year to play four home games in Launceston, would be the only Government-backed side in Tasmania.

Premier Bartlett explained âthe Government won't be entering into any arrangements of sponsorship or underwriting of games at Bellerive so therefore any clubs who made arrangements with AFL Tasmania and the TCA (Cricket Tasmania) to play games there would effectively be doing so without Government involvement.

"Having said that, I wouldn't actively stand in the way of it either."

Hawthorn's five-year contract expires at the end of 2012 but, significantly, is due for renegotiation this year.

While no Government financial support would be a deterrent, an AFL club may look at the Hobart option by the lure of a 'clean' stadium and large, untapped football-mad population starved of local AFL content or attempt to attract support from a private entity.

The architect of the Hawks-Tasmania contract, former State Premier Paul Lennon, has been pushing for more AFL games in Hobart and said Richmond was the logical fit, stating "I think it is a very good idea.

"I think it is time that AFL football was played live in Hobart. I think the Richmond Tigers would be a very good fit given they have had a long-time association with Tasmania."