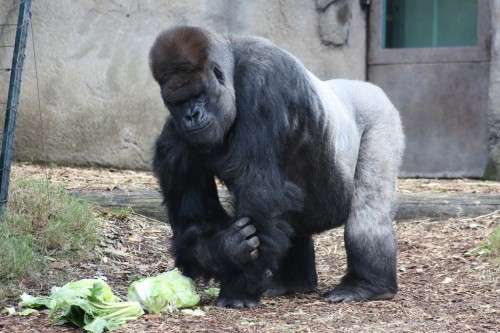 The patriarch of Taronga Zoo's gorilla family will step down from his post in a few weeks' time to make way for a younger leader.

Silverback gorilla Kibabu will live out his retirement at the Mogo Zoo on the NSW south coast with the 36-year-old gorilla tobe replaced by a 12-year-old silverback from France.

Taronga Zoo spokesman Mark Williams says the 210 kilogram ape has been a role model for the zoo's gorillas since he arrived 17 years ago, stating "a lot of their behaviours are learned and he's still a bit of a kid at heart.

"The keepers will often catch him playing gorilla kiddie games with the younger gorillas but if he sees them watching him, he immediately stops and becomes the icey-faced silverback."

"He came to us from Holland in 1996 and he's been such an incredible leader of our group, he's regarded globally as one of the models of gorilla male behaviour."

Taronga Zoo says Kibabu's move has been planned for many years and emulates the natural lifecycle of gorilla groups in the wild.

It says Kibabu has made an impressive contribution to the global population of Western Lowland Gorillas.