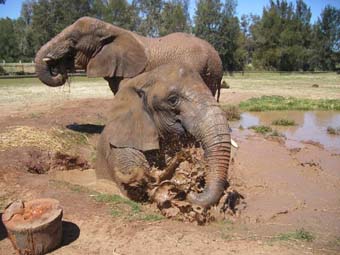 The new exhibit, comprising a three stall elephant barn and two paddocks, has taken over a year to complete and includes solar power and a green insulation system.

It will be home to four new elephants, being transferred from Sydney's Taronga Zoo, making this the biggest herd Western Plains Zoo has ever housed.

The group from Sydney will include mothers Porntip and Thong Dee along with their male calves Pathi harn and Luk Chai.

Taronga Western Plains Zoo is confident the elephants will have a smooth transition into a new facility, with Taronga Western Plains Zoo General Manager Matthew Fuller stating "it's very important for us as an organisation that we operate sustainable facilities and obviously, housing a series of elephants is something that some might look at and think 'that's a difficult proposition'.

"So we've incorporated some really smart things like solar, photovoltaic energy production which will run all of the electrical components through the course of the day in the facility.

"We've got evacuated tube, hydronic heating that rushes water up into the roof, heats the water, and then it goes back into the barn and into purpose built sand beds for the guys."

Confident that the elephants transfer from Sydney to Dubbo will be a smooth one, Fuller told the ABC "the dynamics within the herd is right, the animals are comfortable and in a period where they're happy to move.

"Obviously a lot of work and effort goes into before the transport and conditioning those animals into those crates so they're fully comfortable."

The new herd will be isolated for some time, but the Zoo has ensured the new facility reflects the wild in that elephants can move independently to other areas if they want to.

The Zoo also hopes that the new facility will lead to breeding.