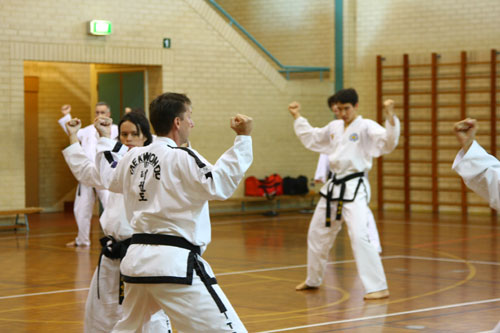 Following a series of successful programs conducted through 2015, International Taekwon-Do New Zealand is looking to this continue steady increases with its active member numbers and the place it has with Kiwisport and the wider community.

Through Kiwisport, Taekwon-Do has already commenced programmes across 18 schools in the Counties Manukau and Waitakere schools teaching over 2,000 children self-defence and flexibility. The sport is also involved in a growing number of schools on the North Shore of Auckland with the participation projects set to start in the coming months.

Kubz is an education programme for pre-school children which contains a fun and vibrant Taekwon-Do element and from there they go into a New Zealand developed school-age programme which is part of the formal Taekwon-Do syllabus but still designed with this age group in mind.

Kubz teaches child protection against adults, known and unknown, dealing with bulling, verbal and non-verbal, health and fitness and the benefits of working together and the fun of sharing.

Overall there are currently 79 registered Taekwon-Do clubs across New Zealand with the largest at the Warrior Club in Ellerslie, Auckland run by Master Paul McPhail which has 276 members. The other club with over 200 members is PM Papakura, also with Master Paul McPhail as the chief instructor.

There are five other clubs in New Zealand boasting well over 100 members each including Tauranga, Manawatu and Horowhenua.

The sport is also gaining respect and kudos in various places in the community. Melissa Timperley won 2015 Blues AUT Sportsperson of the Year of the year, McPhail was the coach of the year at the Counties Manukau Sporting Excellence Awards last year while Junior World Champion Frances Lloyd was awarded an AMP Scholarship.

Many other Taekwon-Do athletes made the finals of sports awards or were winners around New Zealand in 2015.

The New Zealand team was also the overall best team at the Taekwon-Do world championships in Jesolo, Italy with a number of athletes winning individual world titles. The teams performance at the World Champs has seen it named a finalist in the Halberg Team Of The Year for 2015.