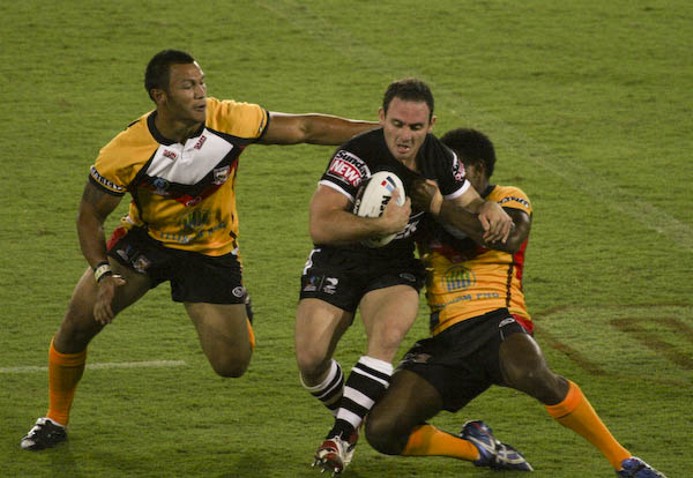 The research, published by Sports Medicine Australia in the Journal of Science and Medicine in Sport, is the first to prove that games involving physical contact left players with greater upper-body fatigue and muscle damage, compared to players who engaged in ‘non-contact’ games.

The findings have implications for how clubs manage physical contact training and recovery during the season.

Johnston explains “while previous research has suggested that the main cause of muscle damage following competition rugby league matches is due to the physical toll of performing tackles, no research has implicitly confirmed the relationship between physical contact, fatigue and muscle damage.

“We found a clear connection between physical contact, increases in upper-body fatigue and muscle damage and a reduced sense of well-being.

“The extent of damage and fatigue is likely to be far greater during match games, as the simulated contact efforts used for our study were lower in number and did not reflect the high-speed, violent blunt force trauma of collisions associated with competition.

“These results suggest that for players to recover sufficiently for each week’s match, physical contact training sessions should be performed well in advance of scheduled games.

“Strength sessions aimed at improving upper body power should either be performed prior to contact training sessions, or more than 24 hours later.

“Physical contact is extremely demanding, but players need to be exposed to contact during training to prepare them, both physically and mentally, for that ‘worst case scenario’ during competition. There is a fine line between ensuring players are well equipped to deal with these demands and managing the risks associated with ongoing muscle damage and fatigue.”

The study ‘Influence of physical contact on neuromuscular fatigue and markers of muscle damage following small-sided games’ will be published in Volume 17, Issue 5 of the Journal of Science and Medicine in Sport.