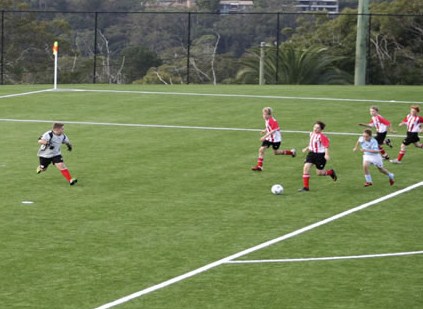 Synthetic surfaces advisor Martin Sheppard, Managing Director of Smart Connection Company, who consults councils and clubs on the use of artificial turf, believes that local communities, football clubs and associations should have confidence in the fields that they and their children are playing on.

A statement issued by Sheppard following Sunday's The Sun-Herald articles read, "it is important that as a sports and recreation industry that we provide expert guidance to the community and the football family to provide them with a level of confidence that demonstrates that they are not at any greater risk in using synthetic football fields compared to natural turf.

"The recent press coverage regarding the possibility of leaching of chemicals or possible infection from the recycled tyres (SBR) used as infill in the football fields, may (have) caused a sensation in the media and generated mistrust and confusion in the community, so it is important that the community does not trust a single persons view, that may have been expressed in the media, but considers the considerable research that has been conducted, together with that of the world (football) governing body, FIFA.

"There has been significant research over the past five years in both Europe and America, where thousands of synthetic football fields have been installed, together with the proactive quality stance and response from FIFA and the quality manufacturers to ensure that safe and playable surfaces are laid which promote the benefits of having accessible and quality pitches to play the game of football on.

"Research conducted by The New York State Department of Health (2009); California Environmental Protection Agency; The Swiss Ministry of Environment, Traffic, Energy and Communications (2005 -2007); The Norwegian Institute of Public Health (2009); The French National Institute of Industrial Environment and Risk (2008); all concluded that there seems to be significant evidence that there is limited impact on the environment from the chemicals imbedded in the infill when used within the acceptable limits. These limits are clearly defined in the European Standards DIN 18035 part 6 and 7 and ESSM105.

"Specifically, the studies that have been conducted by both the California Environmental Protection Agency Office of Environmental Health Hazard Assessment and the Norwegian Institute of Public Health, to assess the potential for ingestion of chemicals in crumb rubber by children playing on synthetic turf. Both studies concluded that health risks to children resulting from the ingestion of crumb rubber are low.

"FIFA has issued quality standards for synthetic football pitches since 2003 through their Quality Concept for (synthetic) Football Turf, which Willoughby Council, which owns the Northbridge Oval (the surface mentioned in The Sun-Herald article) has received (multiple) certifications.

"Smart Connection Company encourages sport or local government who may be interested in installing a synthetic pitch that they consider the following points:

• That the pitch will be a FIFA certified;

• That the tender process only considers installation by a FIFA Licensee (or one of their approved partners) or a FIFA Preferred Producer;

• That the local Football Association is involved or the State Football Federation to provide any guidance needed;

• If not sure of the best options partner with a proven consultant that has a track record in synthetic turf installations and management to provide the guidance needed."

Martin Sheppard, Managing Director of Smart Connection Company has over 20 years experience in the use of artificial surfaces for sport and is the author of Martin is currently completing a Guidebook to Artificial Sporting Surfaces (2010).