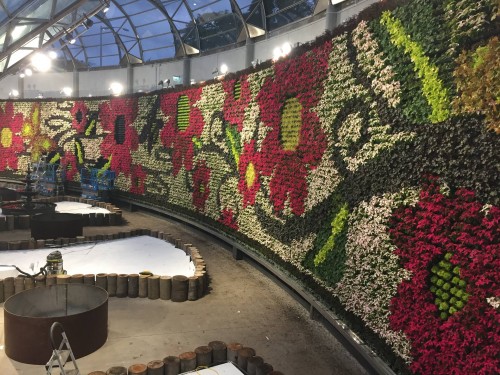 The Calyx attraction in Sydney’s Royal Botanic Gardens will soon be opening what will be Australia’s largest indoor Green Wall with over 18,000 flowers being used to make a beautiful, unique collage along the wall, which is 5.5 metres high and over 50 metre long.

Set to open on 20th May in the award-winning glasshouse, the feature is will be the centrepiece of The Calyx’s integrated mix of indoor and outdoor areas.

A free display, open daily from 10am to 4pm, All About Flowers includes the green wall, a series of large garden beds and a fountain. The giant living floral wall at the centre of this display takes the form of a living watercolour painting.

Royal Botanic Gardens Sydney Director of Horticulture and curator, Jimmy Turner, says that All About Flowers is an extravaganza of colour, explaining “the Calyx has been transformed into an indoor garden and as the showpiece, there is a giant living floral wall taking the form a living water colour painting.

“It has become a vibrant hub for art classes, children’s craft sessions and drop in Ikebana classes - the ancient Japanese floral art form.

“Contained in our architecturally designed glasshouse, our next display, is a poetic homage to the masters of Impressionism.

Opened in June 2016, the contemporary glasshouse has attracted high profile brands who have used The Calyx as the backdrop for their glittering events, while exhibitions and display are now being rotated through the space for day time visitors to the Gardens.

The venue was built around the site of the Arc Glasshouse, in the south western corner of the garden. It’s intelligent, sensitive architecture has replaced the Tropical Centre pyramid and foyer with a new view to temp Garden dwellers.

Image: The Calyx's Green Wall been prepared in advance of its 20th May opening.