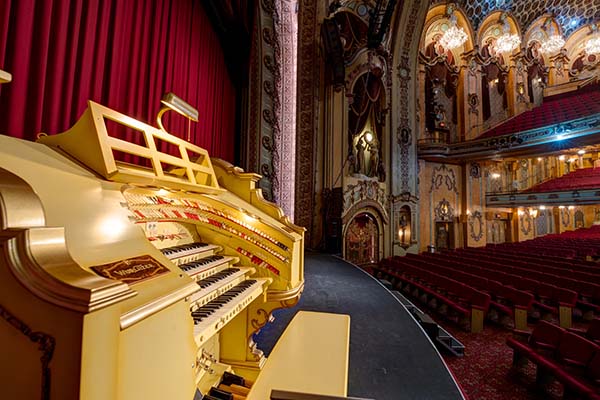 The restoration brings the organ, which has not been played with full purity of sound for 65 years, back to life for future generations.

The Wurlitzer is the jewel in the crown of the State, making the 90th anniversary the perfect moment to unveil the refurbished organ, the only organ of its type remaining in its original home in Australia.

The State Theatre was the last and most lavish of the great movie palaces to be built in Australia, opening its doors in 1929, four months before the Great Depression. One of the most significant features of the State Theatre upon opening was the grandeur, sound and experience of the Wurlitzer organ, which functioned as the voice of silent film and was a major drawcard for theatre-goers.

Over 90 years, the State Theatre has remained relatively untouched, making it the only historic movie palace of its size remaining in Sydney, and a time capsule of the history of theatre, film and entertainment in Australia over the last 90 years.

Recalling the rich part the State Theatre has played in the cultural fabric of Sydney, Event Hospitality and Entertainment Chairman, Alan Rydge stated “90 years ago Sydney’s greatest picture palace opened. The Theatre underwent a major $1 million renovation commencing in 1980, restoring the State Theatre to its original glory. This was followed more recently by the meticulous restoration of The Butterfly Room which was completed in early 2019, and now the restoration of the Wurlitzer Organ.

“The State Theatre not only encapsulates a rich history, it is an important part of the cultural fabric of our nation and holds significant value for future generations.”

The Wurlitzer organ was built by the Rudolph Wurlitzer Manufacturing Company located in North Towanda, New York.  The company built 2,243 pipe organs, however world-wide only a dozen Wurlitzer organs remain as originally conceived and built.

The State Theatre’s Wurlitzer is the largest pipe organ the Rudolf Wurlitzer Manufacturing Company exported, featuring 1,497 pipes. In total the organ is made up of tens of thousands of components, which are uniquely situated throughout the State Theatre; the largest pipes are located under the floor of the stalls while two organ chambers are located high above the proscenium arch over the stage.

Jeff Weiler, President of JL Weiler, Pipe Organ Curators, Conservators and Consultants advised “Many organs have been altered beyond recognition through modifications or amalgamations, but this instrument, in the State Theatre, is one of a very elite class that remains essentially as created by its makers. So it’s in a rarefied class from that standpoint.

Weiler added “today, the State Theatre’s Wurlitzer organ is one of the only organs to remain in situ and to be tonally unaltered, in that sounds you hear today following the renovation are the same that were heard 90 years ago in the days of silent film/"

The State Theatre welcomes visitors on guided tours to discover why it is known as the Palace of Dreams.