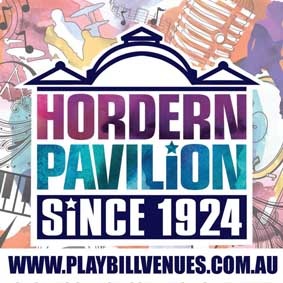 ‘The Hordern’, as it is affectionately known, has been an architecturally and socially significant landmark since it opened in 1924, and is still attracting some of the biggest names in the world with acts including Nirvana, The Stone Roses, One Direction, Coldplay, The Pixies and Cold Chisel having played at the venue in recent years.

The history of the Hordern Pavilion is as follows: 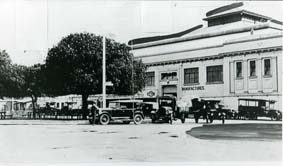 1920–1960s
The increasing popularity of the Royal Easter Show and the demand for more exhibition space in the early 1920s drove the Royal Agricultural Society of NSW’s decision to remove the existing Vehicle Pavilion, the Carriage Pavilion, the Lecture Hall and the Women’s Industries building and replace them with the Hordern Pavilion.

The venue was named in honour of the enterprising retail family, Anthony Hordern and Sons, and Sir Samuel Hordern, the Society’s President from 1915 to 1941.

Designed in the Inter-War Academic Classical Style by architects Trenchard Smith & Maisey, the building featured fluted Doric columns, a parapet and an imposing vaulted roof with lantern tower and cost £45,000 to build. Incorporated in the design were a concrete floor, large door entrances and a spacious interior to easily accommodate vehicles and large machinery.

The Hordern also served as a formal entrance façade to the Showground and was considered to “exemplify the dignity and enterprise of modern business”.

The new venue was an impressive site for attendees at the Royal Easter Show of 1924 with a contemporary report in The Sydney Morning Herald stating “the architectural features of the new Hordern Pavilion have been much admired by visitors to the show. Throughout yesterday a large crowd passed steadily through, dividing their attention between the exhibits on the floor and the massive superstructure which supports the roof”.

Scale models of the ocean liners Moreton Bay and Otway proved very popular, as did the Wm Docker Ltd display of paints which included a large model of the “proposed Harbour Bridge”.

Many of these companies were regular exhibitors in the Hordern at the Easter Show in the ensuing years as this was seen as the ideal showcase for manufacturers and retailers alike. In the period leading up to World War II, the venue featured the newest and best Australian products and the content reflected the changing nature of Australia as a country.

By the mid 1930s, there were more high-end items on display – grand pianos from Elvy & Co, wireless receivers, Regal and Globite luggage trunks and cases, modern gas appliances from the Australian Gas Light Company, high quality Bear & Co furniture and large exhibits from Lustre Hosiery who showcased machinery used in the manufacture of their garments.

Aside from the Royal Easter Show, the Hordern was utilized for a variety of events, some of which were a little unusual. In 1925 the first covered tennis courts in Australia were constructed in the venue, in 1932 the venue hosted the Australian model aeroplane contest, in 1934 the Hordern became sleeping quarters for a national gathering of the Youth Australia League and during WWII it was occupied by the Army and used as a bulk store. 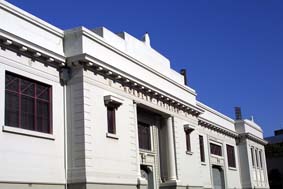 1970s
However, the most significant change for the venue came in the early 1970s. The explosion of interest in rock & roll music in the 1950s, combined with the improved availability of air travel, resulted in a substantial increase in the number of artists touring Australia.

As a consequence, the Sydney Stadium at Rushcutters Bay became the venue of choice for major international acts such as Ella Fitzgerald, Judy Garland, Frank Sinatra, The Beach Boys, Cliff Richard and, of course, The Beatles.

When the Stadium was demolished in 1970 to make way for the Eastern Suburbs railway, Royal Agricultural Society of NSW (RAS) Chief Executive William Parry-Okeden undertook to convert the Hordern Pavilion from an exhibition hall to a multi-purpose venue capable of hosting music and sporting events.

This conversion included the removal of the majority of the columns and the installation of a truss system, the inclusion of a false ceiling and bar and box office facilities as well as a mezzanine corporate box area.

This move heralded the beginning of a golden age of rock music in Sydney according to Glenn A. Baker, rock historian and thrice-crowned ‘Rock Brain of the Universe’, “nothing much had happened since '68. The vibe was bad. A girl died at the Monkees in '68, and there was terrible social pressure on rock.

“The international acts, which had played Randwick Racecourse and Sydney Stadium, weren't coming any more. Sydney was desperate for a new venue."

The work was completed in February 1972 and the following 11 years proved to be extremely busy.

RAS records note that during this period there were 1,237 events which drew a total attendance of 3,805,500.

Virtually every major act that played in Sydney from 1972 until the opening of the Sydney Entertainment Centre in May 1983 performed at the Hordern, and the list reads like a who’s who of contemporary entertainment.

Baker recalls "the rock scene came surging back and the Hordern was the epicentre.

“One amazing moment came when a certain Norman Gunston, aka Garry McDonald, climbed onstage and played harmonica with Frank Zappa and the Mothers of Invention." 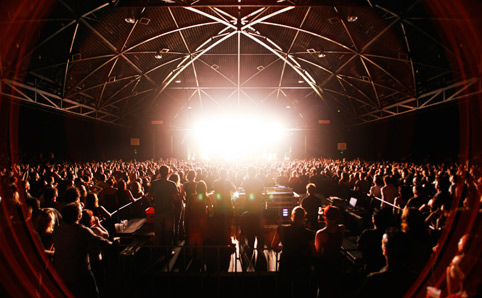 1980s
Aside from the many concerts, the venue was the home to many large meetings and congresses, children’s shows, ice shows, religious events, ethnic shows and sporting events, both serious (boxing, tennis and gymnastics) and not so serious (Harlem Globetrotters, wrestling and roller derby).

The event mix was changing as exhibitions and product launches were making a return and a number of international acts (including Elton John, Eric Clapton, Duran Duran & Mick Jagger) used the Hordern Pavilion as a rehearsal space for their large arena tours.

Another shift in the use of the Hordern came in the guise of the Dance Parties of the mid to late 1980s. The venue was first used for this purpose by Mardi Gras in October 1984 and this was followed by the Sleaze Ball in 1985.

Mardi Gras used the venue intermittently over the next few years until their events became fixtures at the Hordern Pavilion and Royal Hall of Industries from 1991 to the present day.

The Recreational Arts Team’s first Hordern party was New Year’s Eve 1987 and it was the beginning of an extraordinary period for both the venue and the Sydney dance music scene. With the emergence of acid and house music out of Manchester and Chicago, the Hordern became synonymous with the dance music movement.

In fact, Sydney briefly reigned as the ‘dance party capital of the world’ in the late 1980s. Other promoters followed the RAT team’s lead, and on an almost weekly basis, the Hordern was transformed into a “vibrant, packed palace” with each event striving to outdo the previous one with a “diverse range of entertainment based on audio and visual stimulation”.

Along with the RAT parties, the numerous Sweatbox and Bacchanalia events became the stuff of legend. In total there were 10 parties at the Hordern in the 12 months from December 1988 followed by an astounding 28 parties in 1989.

1990s
In 1997, the Royal Easter Show moved to Homebush Bay, and the Hordern Pavilion and Royal Hall of Industries became independent venues. They were renovated and refurbished in 1999 and re-opened by new operators the Nebenzahl family’s Playbill Venue Management, and they quickly gained the reputation as flexible, multi-purpose venues capable of hosting a wide range of events. 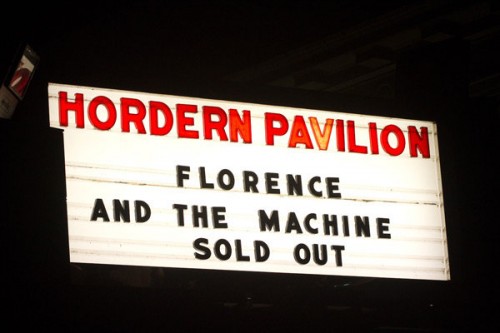 The Hordern today
The Hordern remains a concert venue and, as has been the case since 1983, it is the place to go to “get up close and personal” with your favourite act before they move to Arenas or Stadiums.

The Hordern is also a busy exhibition and function venue. Major corporations and charities are regular hirers and the venue holds the distinction of hosting the AFL’s prestigious Brownlow Medal presentation on the only occasion it has ever taken place outside of Melbourne.

90 years after it opened to much public acclaim, the Hordern Pavilion remains one of Sydney's bestloved entertainment landmarks and it will undoubtedly continue to have a significant role to play in the Sydney venue landscape.

The venue is managed by Playbill Venues, a subsidiary of Playbill Pty Ltd.