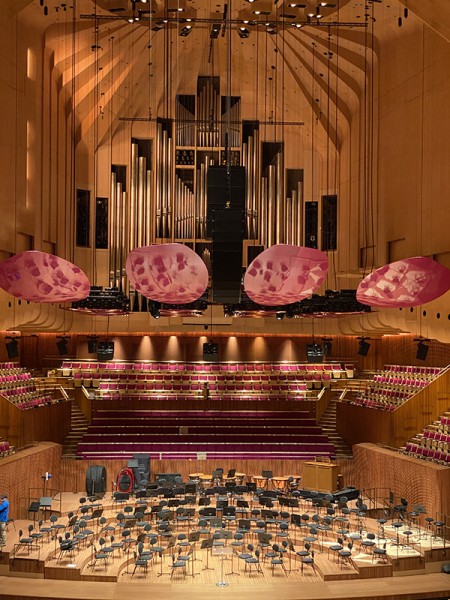 After more than two years of extensive renewal works, the Sydney Opera House has revealed the $190 million transformation of its largest performance space, the Concert Hall, which reopens to the public next week.

The major works of the largest and final project in the Opera House’s Decade of Renewal were unveiled during the first walk-through held early Thursday (14th July).

Funded by the NSW Government, the 10-year program of capital works totalled almost $300 million to upgrade the World Heritage-listed masterpiece ahead of its 50th anniversary in 2023.

18 semi-gloss magenta acoustic reflectors are situated above the stage replacing the old clear ‘doughnuts’ with these ‘acoustic petals’ matching the magenta-coloured Concert Hall seats chosen by architect Peter Hall. These ‘acoustic petals’ are set in a range of positions, depending on the music being played. The magenta colour creates a warm and welcoming ambience throughout the Concert Hall.

Hall took over completing the interiors of the building when the Danish designer Jorn Utzon departed in 1966. 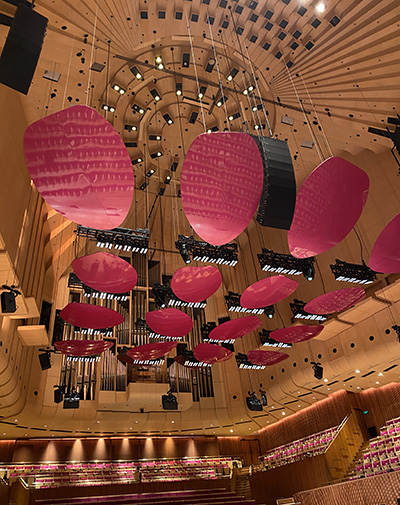 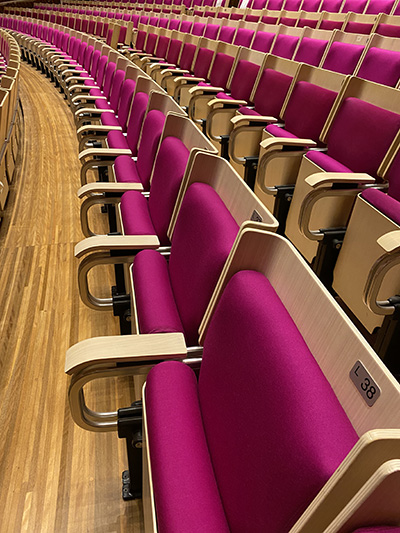 The complex renovation of the World Heritage masterpiece, ahead of its 50th anniversary in 2023, combines respect for heritage with cutting-edge technological innovations, including state-of-the-art theatre machinery and staging systems. These systems better equip the hall in presenting an ambitious range of performances, from classical music to contemporary concerts, theatre and beyond.

The project has improved the acoustics for artists and audiences in both orchestral and amplified mode, enhanced access for people with mobility needs, and provided a more flexible and safer working environment for staff behind the scenes. 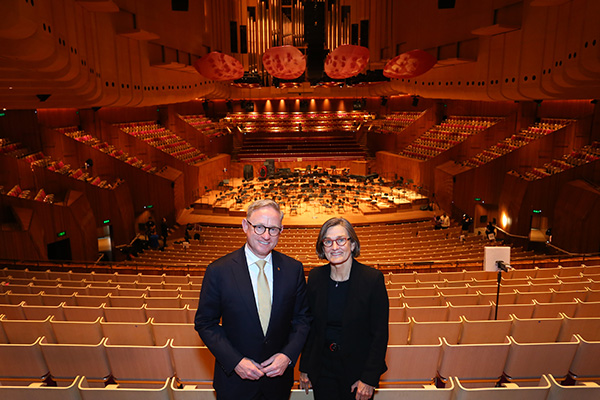 Opera House Chief Executive Louise Herron (pictured above right) enthused “we’re thrilled to be welcoming the community back to the renewed Concert Hall. Artists and audiences are set to experience world-class acoustics in a venue that is more accessible, safer and better equipped to present the full breadth of 21st century performance. We have been working towards this moment for a long time and are incredibly grateful to the NSW Government and to everyone else involved in making this once-in-a-lifetime project possible.

“You can feel the clarity and warmth now in both amplified and symphonic mode; the range of sound is much clearer now. I was blown away when I first heard it.”

Since the venue closed for renovations in February 2020, hundreds of construction workers, acousticians, architecture and heritage experts have been busy delivering the biggest upgrade to the Concert Hall since it opened almost 50 years ago, with all possible care and attention taken to protect and respect the heritage of this treasured performance space.

Automated stage risers will allow musicians, particularly classical musicians who typically sit in a horseshoe formation, to hear each other more clearly – an acoustic improvement appreciated by Sydney Symphony Orchestra Concertmaster Andrew Haveron who this morning spoke of the extensive acoustic testing required. 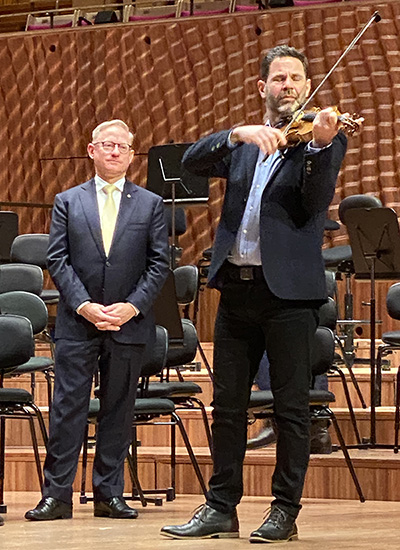 Haveron (performing above with NSW Minister for the Arts Ben Franklin looking on) shared "every great orchestra around the world has a symbiotic relationship with their home venue – they become synonymous with the space. The place that an orchestra performs in is just as important as the instruments and musicians that are on stage – it shapes the way we sound and how an audience experiences live performances with us. The extraordinary acoustic improvement of the Sydney Opera House Concert Hall – which has far exceeded any of our expectations – means that finally, the Sydney Symphony Orchestra can be heard at its finest!" 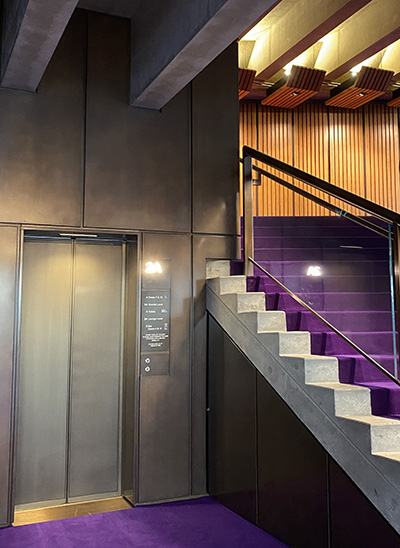 Other upgrades have improved accessibility with a new lift and passageway making it possible for wheelchair users and people with limited mobility to access all levels of the hall independently.

The stage has been lowered by 400mm to improve sightlines and create more intimacy between artists and audiences. Backstage areas have also been enlarged.

Over 9000 square metres (equal to about 14 tennis courts) of protection was installed across the Concert Hall and its surrounds to safeguard the heritage finishes.

The upgrade also involved the recycling in excess of 91% of demolition waste - well above the target of 80%. 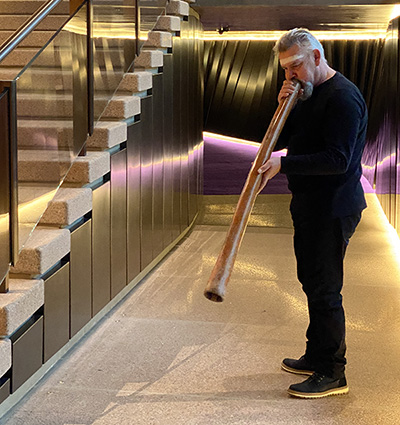 For the opening concert, which will take place next Wednesday under the helm of the Sydney Symphony Orchestra’s Simone Young, didgeridoo player William Barton (pictured above on Thursday morning) will play, accompanied by performers with 60 pairs of clapsticks made using brushbox timber salvaged from the Concert Hall’s old and new stages.

At the Thursday walk-through, NSW Minister for the Arts Ben Franklin noted “the Concert Hall is the beating heart of the Opera House. The renewal of this magnificent performance space will ensure the Opera House remains relevant and contemporary for the people of NSW and the rest of the world.”

Facts about the Concert Hall upgrades

Facts about the 18 new acoustic reflectors