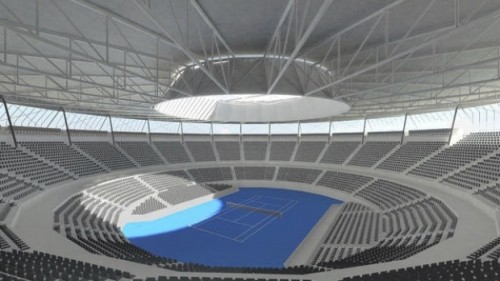 Amid reports of poor crowds at this week's Sydney International tennis tournament, the plan would transform the Ken Rosewall Arena from a tennis venue into a multi-purpose facility.

Following the closure of the Qantas Credit Union Arena (the former Sydney Entertainment Centre) in December, Sydney lacks a mid-sized sport and entertainment arena and a roofed Ken Rosewall Arena would meet the needs of the NBL's Sydney Kings (who now play at Sydney Olympic Park Sports Centre) and the NSW Swifts in netball's ANZ Championship.

According to Fairfax Media SOPA has commissioned BVN Architects to design a roof for the 11,000-seat venue facility, which was built for the Sydney 2000 Olympics.

Fairfax Media report that Tennis NSW, Netball NSW and Basketball NSW are backing the plans to put a roof on the venue.

BVN Architects practice director Ross Seymour told Fairfax Media “we looked at not just a closing roof for tennis, but actually what it would take to get it as a multi-purpose stadium.

The NSW Government has only just begun a feasibility study on a potential $150 million indoor arena for the Sydney CBD – with the Wentworth Park sport and greyhound stadium believed to be a preferred choic.

The $50 million budget estimation to transform Ken Rosewall Arena also includes the renovation of the changing room facilities that would allow for team sports to be played. It also includes plans to incorporate corporate facilities on the second level platform as well as additional options at the top of the grandstand.