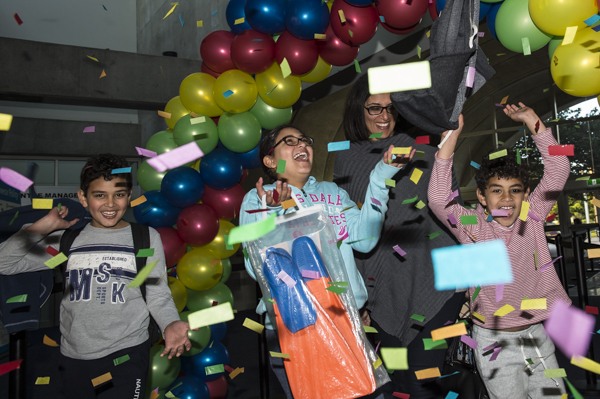 Jacqui Michail, along with her children Esther (aged 10), Jacob (aged seven) and Samuel (aged six), from Gladesville were visiting the Aquatic Centre to attend swim school when they were surprised as the 23rd millionth visitor walking through balloon arches, sprayed with confetti, and receiving a gift of a night’s accommodation and buffet breakfast for two at the Pullman Sydney Olympic Park, movie tickets and a Speedo pack.

A delighted Michail stated “becoming the 23rd millionth visitor at the Sydney Olympic Park Aquatic Centre was a huge surprise and a great honour.

“The children were overwhelmed with excitement and joy, handed Speedo gifts by Matthew Mitcham and Marieke D’Cruz was a privilege.

The celebrations extended to others who were visiting the Aquatic Centre facilities that afternoon as a large cake was shared by all. 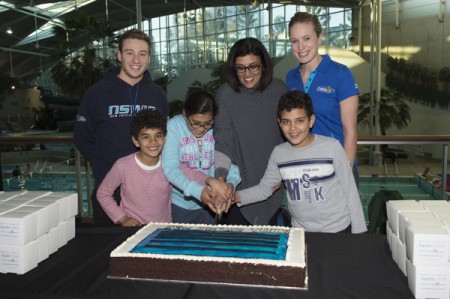 Sydney Olympic Park’s Aquatic Centre opened to the public in October 1994 and today is one of the most popular aquatic facilities in Australia attracting on average 1.1 million visitors a year.

Since opening its doors, the facility has hosted 42 world records broken in its pools from 1999-2008, was the venue for diving, swimming, water polo and synchronised swimming during the Sydney 2000 Olympic and Paralympic Games, and today continues to host international, national, state and community competitions.

The Aquatic Centre is more than just a swimming pool, and continues to adapt to remain an attraction through new offerings including Splasher’s Water Playground and Circus Arts Trapeze both in 2008, Urban Jungle an outdoor high ropes adventure course in 2012 and this year a grandstand refurbishment.

Sydney Olympic Park Authority manages the Aquatic Centre to maintain this quality piece of infrastructure for NSW, supporting both elite athletes and the community alike. As a successful post Olympic venue, the Authority regularly hosts international delegates at the Centre to see first-hand its lasting positive outcomes.