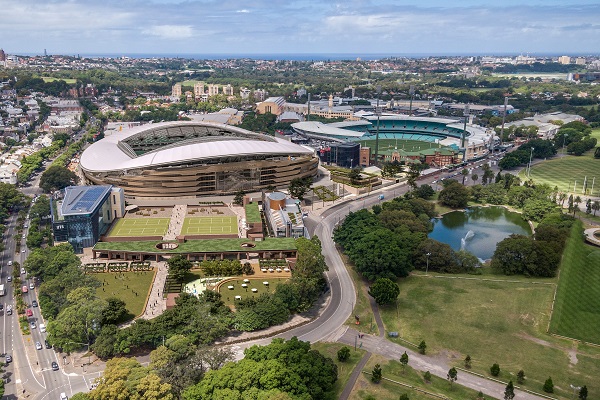 The development of a new ‘village precinct’ and carpark adjacent to the rebuilt Sydney Football Stadium will see car parking will be moved away from grass areas at Moore Park.

In a statement released today, Minister Stokes advised “we’ve seen how important green open space is to people during the pandemic and at Moore Park alone, there has been a 20% increase in patronage in the last 12 months

“Increasing and improving public space such as Moore Park is part of the NSW Government’s vision to create a city within a park. This is why the upcoming Greater Sydney Parklands Trust Exposure Bill will also legislate additional protections for Moore Park by making it an offence to park on this section of the grass.

“It’s also a huge day for the tireless advocacy of Saving Moore Park, and demonstrates the ability of Greater Sydney Parklands to deliver the parklands our community needs.”

NSW Minister for Sport Natalie Ward said the development will deliver new open spaces for the community and stadium visitors, as well as a children’s play area and a new cafe and restaurant. It will also include a new partially underground 1500-vehicle car park.

Minister Ward added that the plan “will turn what was a bitumen car park into a revitalised green space for nearby residents, as well as the millions of people who will visit the area each year for sporting and entertainment events.

“Moving vehicles off the grass near Kippax Lake and into a purpose-built underground car park is a win for locals and visitors.

“It means a sea of cars will be replaced by inviting open parkland for community recreation and sport, making it a great setting for our new world-class stadium.”

The precinct project, which will be funded by Venues NSW, will be delivered in two stages, with the first stage to be operational by the end of next year. The second stage will be complete in 2023.

Once the car park is fully operational, all remaining on-grass parking will be removed from Moore Park.

Managed by Centennial Parklands, in 2010 the former Sydney Cricket and Sportsground Trust sought to take over the management of areas of Moore Park adjacent to the Sydney Football Stadium in order to have control over parking.

Image: The newly announced concept for a ‘village precinct’ and underground car park (in the foreground) as part of the Sydney Football Stadium redevelopment.