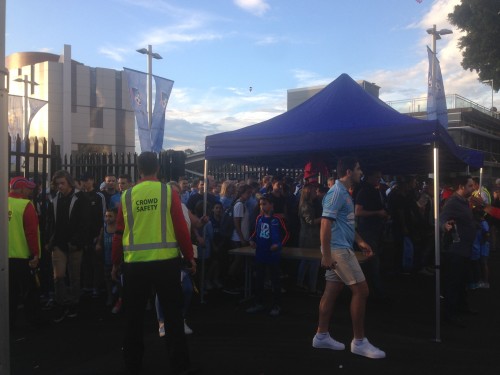 Unhappy fans took to social media on last night after they experienced enhanced security measures as they entered the venue, which saw fans searched and/or scanned with metal detectors.

In response to fan comments, Tony Pignata wrote on Twitter saying he would address fans concerns with the Sydney Cricket & Sports Ground Trust, commenting "I will be speaking to them about last night. Security is being increased by all stadia in Oz.”

Pignata highlighted that security at all sporting events is being increased in the wake of the Paris terror attack in November.

However, Pignata specified there had not been a specific threat made to the venue adding “we live in a different world unfortunately. Look what happened after 9/11.

"After 9/11 airlines increased their security. What happened in Paris has changed things."

As reported in a feature in the November/December 2015 issue of Australasian Leisure Management, the Paris attacks and subsequent incidents that were averted in Belgium and Germany have brought into focus for many managers of the need to reappraise security at attractions, cinemas and entertainment venues, retail centres, schools, sports grounds and stadia, transport hubs and youth camps.

Prior to Christmas, the MCG issued a statement advising that “cricket fans attending Big Bash League – BBL - and international cricket matches at the MCG will be encouraged to allow extra time to enter the stadium after Melbourne Cricket Club and Victoria Police ... announced the introduction of additional security measures, with Cricket Australia and Cricket Victoria supporting the move.”

Starting with the BBL match between Melbourne Stars and Sydney Thunder on Sunday 20th December, the statement advised that “all patrons will be required to undertake bag checks and hand-held metal detection or ‘wanding’ at one of several access points set back from the stadium before entering the MCG.”

The statement added “each of the access points will contain a private area to accommodate any patron who does not want to be scanned in public view. There will also be express lanes for patrons who do not bring bags.”

Melbourne Cricket Club Chief Executive Stephen Gough said patrons should feel reassured that the MCG stadium operator, in conjunction with the major sporting codes, is doing as much as possible to provide a safe environment.

Gough explained “we continue to receive the very best advice from police and intelligence authorities with respect to security matters.

“While the advice remains that there is no localised threat to the MCG, we have taken the opportunity to add an extra layer of security and comfort for our patrons.

“We recognise that the more stringent entry procedure will mean it takes a little longer for patrons to enter the stadium.

“We ask for patience and understanding during that time, and encourage people to plan their journey to arrive earlier than normal to ensure they don’t miss the first ball or a moment of the action.”