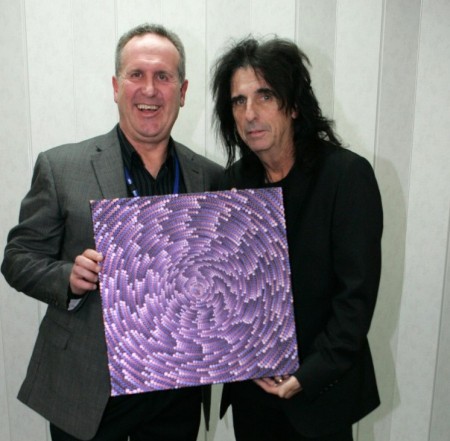 The International Association of Venue Managers (IAVM) has announced the Sydney Entertainment Centre (SEC) as the winner of its 2012 Venue Excellence Award (Arenas) the first time an entertainment arena outside of North America has won the prestigious international award.

SEC General Manager, Steve Romer, was thrilled that the SEC was named as the first international venue to win this major award, stating "for the SEC to be recognized by the peak international body is an absolute honor, not only for our 30-year old iconic venue, but also for Sydney as one of the world's true global cities."

The SEC was competing against many of the world's finest arenas, and was judged as the winning venue by an expert panel of global leaders who manage some of the world's major entertainment arenas. The judging panel assessed the credentials of candidates based on very diverse criteria. The selection criteria included ratings for Operational Excellence; Customer Satisfaction; Sales and Marketing; Sustainability; Financial Integrity; Professional Development; Safety and Security; and Service to the Community.

IAVM Chairman, Richard Andersen, added "all SEC staff should be proud of their individual and combined efforts for the iconic venue to be awarded as the first international recipient of the Venue Excellence Award." Andersen went on to say "although the SEC has long been recognized as an integral part of Sydney's entertainment landscape, it is very deserving for a global city like Sydney to have one of its major iconic buildings internationally acknowledged for venue excellence."

The award was presented during the annual IAVM Congress in Fort Lauderdale, Florida, USA.

The SEC's customer service, professionalism and environmental initiatives have been recognised with a number of major awards in the past year.

The venue was named 2011 Venue Caterer of the Year and was a 2011 Finalist in the 'Caterer at an Event' awards. Last night the SEC was also awarded 'Bronze Partner - Sustainability Advantage Program' from the NSW Department of Environment and Heritage while Steve Romer, was awarded the '2012 Venue Professional of the Year' from the Venue Management Association (Asia Pacific) earlier this year.

8th September 2009 - END OF THE ROAD FOR ARENA MANAGEMENT

27th August 2009 - SYDNEY ENTERTAINMENT CENTRE GETS DOWN TO BUSINESS