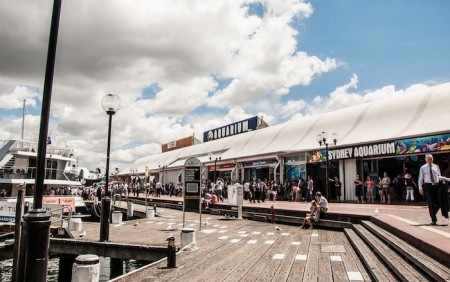 The Sydney Aquarium is set to launch the global phenomenon 'The Future is Wild', a multimedia project of immense scale from award-winning filmmakers and leading scientists.

Already a multiple award-winning TV and book series, a theme park experience in France, and approved school curriculum content in the United Kingdom; The Future is Wild and Sydney Aquarium will take visitors on a journey five million, 100 million and 200 million years into the future.

The Future is Wild exhibition will combine the stunning marine life of Sydney Aquarium with virtual animals that may one day fill the world's seas, streams, rivers, and walk on land alongside augmented reality and the latest sound and visual technology.

Set to open on 25th September, this extraordinary exhibition will showcase futuristic worlds millions of years into the future and the animals within. At Sydney Aquarium current day marine life including sharks, dugongs, sea slugs, crab larvae, cod, and molluscs will be placed beside their hypothetical evolutionary embodiment â where a sea slug will transform into a 2.2 metre long reef glider and the ocean squid as it transforms into a four metre tall mega squid that walks on land.

Sydney's foremost special effects and modelling companies including Liu Balboa Studio (Bob the Builder, The Lion the Witch and the Wardrobe, Australia) are working together with the international team from The Future is Wild to create the future at Sydney Aquarium and provide visitors with one of the most immersive and engaging exhibitions Australia has ever seen.

By looking to possible futures, The Future is Wild exhibition aims to increase awareness of our world and our place in it.

Chris Warhurst, Manager Director, Sydney Attractions Group explains "it's an honour to partner with The Future is Wild and be able to bring the future to Sydney Aquarium. This incredible exhibition takes a fun and educational examination of the animal world and encourages visitors to ponder the world around them."

John Adams, Creator of The Future is Wild adds that "the prestigious and innovative Sydney Aquarium provides the perfect venue in which to bring The Future is Wild to life. The exhibition, with its amazing life-scale models and cutting edge technology offers a unique glimpse into our planetâs possible future and will enthuse and inspire visitors of all ages. We and our team of scientific advisors are very proud to be part of this wonderful experience."

The Future is Wild background:

• John Adams and Dougal Dixon created the The Future is Wild (FIW) in 1996.
• Computer generated animation brings fascinating creatures and environments to life.
• 16 of the worldâs leading scientists including creator Dougal Dixon (Geologist and book author) bring validity and relevance to the brandâs vision of the future.
• FIW brand includes television, publishing, education, museum and science centre exhibits, theme park attractions, feature film, merchandise, interactive entertainment, online community and games.
• Current developments explore the ânear futureâ, bringing human damage to the planet and issues of climate change into sharp focus.
• By looking to possible futures, Future is Wild exhibitions will increase awareness of our world and our place in it.

For more information go to www.sydneyaquarium.myfun.com.au