Swimming with humpback whales to be trialled at Ningaloo Marine Park 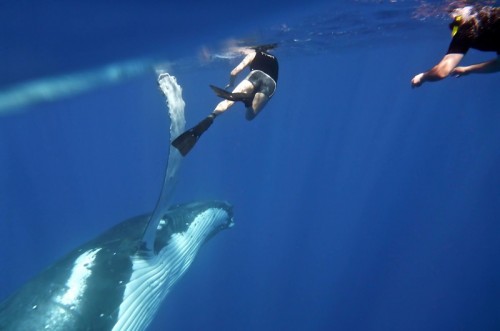 Swimming with humpback whales will be allowed at Western Australia’s famous Ningaloo Marine Park next year as part of a bid to increase nature-based tourism.

Over 20,000 people swim with whale sharks each year at Coral Bay and Exmouth, injecting around $6 million a year into Western Australia’s economy, and it’s envisaged the humpback whale tours will work under a similar model.

Western Australian Environment Minister, Albert Jacob, said existing licensed whale shark tour companies could take part in the humpback whale trial, which will begin in June and determine how the tours can become a permanent feature of Ningaloo and other areas of the state.

Minister Jacob stated “the humpback whale (migration) season actually coincides almost perfectly towards the end of the whale shark season, so this will essentially double the tourism season.”

He said swimmers would not be allowed to touch the whales, but up to 10 people at a time would be able to get as close as four metres from a stationary whale and 30 metres from a moving whale.

No one will be allowed to swim with a mother and her calf or when the whales go within Exmouth Gulf to rest. Large boats will have to stay 200 metres away from the animals.

Minister Jacob said the move came after the Threatened Species Committee recommended delisting the humpback whale from that category and placing it in the specially protected list.

Pew Charitable Trusts declined to comment specifically on the plan until it has seen the detail, but confirmed there had been a huge recovery in the west coast humpback whale population since commercial hunting ended in 1963.

Australia, along with Argentina and Tonga, is among a handful of countries with recognised swim-with-whale trips. 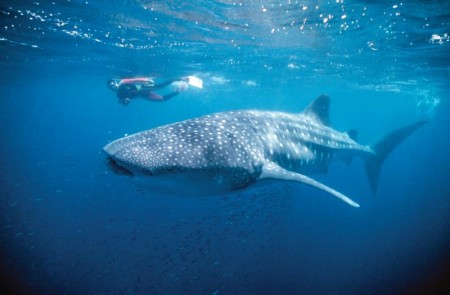 Over the past year, Queensland tour operators have taken advantage of the rebound in whale numbers along the east coast migratory route, offering swim-with-whale experiences in Mooloolaba, Hervey Bay and the Whitsundays.

Franklin stated “there’s a high risk involved particularly when you are dealing with young whales, which are still learning to be whales.

“The other risk factor is that sharks do follow humpback whales.”

A report published in July in the Marine Policy journal found that Australia’s west coast humpback whale populations had rebounded to approximately 90% of their known pre-whaling numbers.

It found the Australian humpback whales to be “an exemplary model of recovery, especially within a marine environment experiencing rapid and concurrent expansion in industrial and exploration activities.”

Images: Swimming with humpback whales in Queensland (top - courtesy of Sunreef Mooloolaba) and swimming with whale sharks at Ningaloo Reef (below).