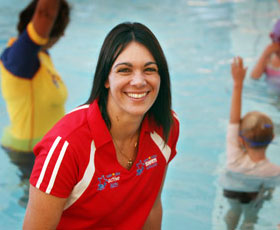 Olympian Samantha Riley, the first indigenous Australian to win an Olympic medal, blazed a path in the 1990s as a world champion breaststroker. However, when Kevin Neil, Swimming Australia's Chief Executive, revealed details about the Red Centre program, he said time and patience would prove as crucial as funding.

Neil recently explained "swimming coaches have told me there is some great Aboriginal talent in the Top End, but they haven't had the opportunities to maximise their potential.

"We've included 24 communities in the initial plan, and the first priority is to get the kids involved in swimming and other aquatic activities. As talent is identified, we'll form an elite development squad, and it'll be based in Alice Springs. It's the perfect location because apart from a 50-metre pool the Aquatic Centre has a 25 metre indoor pool, and that allows us to implement an all-year-round program.''

Tokyo Olympian Peter Tonkin, who has devoted his energies over the past four years to developing swimming skills for the Halls Creek community in the Great Sandy Desert, will oversee the program.

The bronze medallist from the 1960 Olympics said despite being so far from the ocean he was amazed by the aquatic skills of children in desert communities, stating "their swimming skills at young ages are higher than what I saw in capital cities back east.

"I think you'll see some Aboriginal kids become great sprinters, and I hope to see the day ï¾ we unearth indigenous Australia's answer to Ian Thorpe."

Olympic champion Alice Mills, who visited the Top End last year, is a keen supporter of the initiative because it could open the door to a new world for indigenous children. However, she agreed with Neil's view the project would require a strong commitment of time and effort.