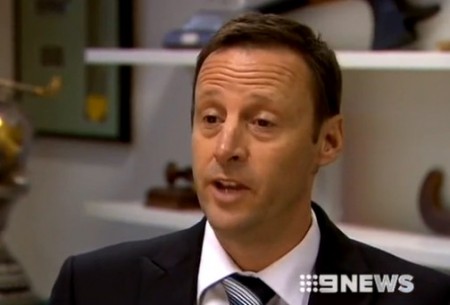 As it implements significant changes following the London 2012 Olympics, Swimming Australia (SA) has made two key appointments with Michael Scott set to take up the role of Director of High Performance, while Mark Anderson has been announced as the new Chief Executive.

Scott is a former Director of the Austalian and NSW Institutes of Sport and joins SA after serving as British Swimming's National Performance Director.

Anderson (pictured), whose appointment had been expected over recent weeks, will step down as Hockey Australia's Chief Executive.

In a statement SA President Barclay Nettlefold explained "these appointments are just another positive step in setting up the best leadership structure to enable athletes and coaches to perform at their best."

Anderson will start next month but Scott's commencement date is yet to be confirmed.

The appointments follow two reviews into Australia's poor performance in the pool at the London Olympics that pointed to a lack of leadership and a poor team culture.

The Olympics proved disastrous for Australia, who returned with just one gold, six silver and three bronze medals, its worst showing at a Games since 1992.

The appointment of Scott and Anderson also comes in the wake of the Australian Sports Commission's (ASC) directive to swimming to adhere to mandatory reforms or have their funding cut by as much as 20%.

The ASC says it is demanding higher standards and greater accountability and its reforms focus on three areas of governance - the structural model, composition of the boards and financial transparency.

Anderson, who had previously been a senior executive with AFL club Essendon, experienced great success with Hockey Australia since taking on the role of Chief Executive in November 2008.

He implemented a new constitution and corporate strategic plan, helped forge new gold-level partnerships with Fortescue, Ausdrill and ANPHA, and he has strengthened relationships with key federal and state government partner organisations which has led to an unprecedented period of financial stability for Hockey Australia.